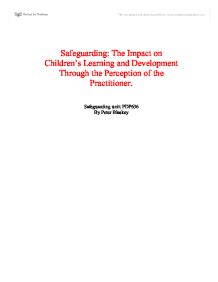 Safeguarding: The Impact on Childrens Learning and Development Through the Perception of the Practitioner.

Safeguarding: The Impact on Children's Learning and Development Through the Perception of the Practitioner. Safeguarding unit: PDP636 By Peter Blaskey The aim of this assignment is to explore and discuss how Early Years Practitioners perceive the safeguarding of children and what influences the way it is perceived and implemented. It is also the aim to discuss how the internal conceptualisation, and external pressures, of factors such as policy, the language used in relation to safeguarding and OFSTED, impact on professional practice and how that impacts on children's learning and development. It will consider, what appears to be an increasing belief that we, as a society, should remove all risk to children creating an insular world of safety. Drawing on reading and other people's research, it will also look at the opposing view of some Early Years professionals and the arguments they put forward in the consideration of risk taking. I work as an Early Years Advisory Teacher supporting a number of Early Years settings in the improvement of quality provision for children's learning and development. This is across a Phase one Children's Centre Reach Area consisting of some maintained Nurseries but is mostly focussed on Private and Voluntary Independent Nurseries. My role is in keeping with the statutory document, Early Years Foundation Stage (EYFS, DCSF 2008). The settings work towards the Practice Guidance and the statutory framework. The document became mandatory for all settings working with children under five years in September 2008, and came about from the Childcare Act (2006) ...read more.

98. DCSF 2008). Looking back to my own experience in school, the children in the Nursery were given access to much higher and more precarious equipment than anything the manager at this setting is considering. The children did fall occasionally and learnt to set their own boundaries and recognise what was in their own capabilities, "learn to avoid dangerous places and equipment" (Development matters, EYFS Pg. 97. 2008). It was encouraged that children were supported in their adventurous play, "children should, Jump off an object and land appropriately" (Development matters, EYFS Pg. 97. 2008). The EYFS also states that effective practice is to provide opportunities for children to learn about risk so that they can learn to consider their own and others safety. That raised another question in my mind. What do we mean by taking risks in a safe environment? Is anything ever 'safe' enough? Is it possible to take risks in a safe environment? If the environment is safe can risk be taken? Is it that I am basing my expectations on my past experience? Are children being overprotected to such an extent that they are unable to make their own risk assessments? Not only are we not providing children with the tools for them to learn with but we are preventing them from gaining the skills needed to make their own judgements which will actually keep them safe. If so why do we do this? Could it be that views about safety have become a 'truth' we all accept without question? ...read more.

It is further argued that, "For those who are concerned with wider issues of children's learning, it is likely to have far more significance." (Stephenson, 2003). Appendix 1 1. A day Care Nursery 2-5. After an OFSTED inspection there was a recommendation for the outdoor area to be developed so the children had the opportunity to "climb up, over and through". I raised the manager's awareness of her entitlement to apply for a grant to improve the outdoor area and suggested to her that she applied for money to purchase equipment that would promote children's gross motor skills in this way. I guided her toward the type of equipment she could purchase and asked her what she thought. She said she was reluctant to provide anything that would encourage children to climb for fear they might fall. Also she didn't want to create any areas which children could hide inside, such as tunnels, in case they hit each other when they were not in sight. I suggested she might acquire the clear, perspex type to enable her to see inside. The manager replied that even if she could observe the children, they might be likely to kick each other in panic if they got stuck. After a few weeks of strong consideration, the manager has agreed to purchase some equipment but is still very concerned about the consequences and has made the decision to remove two old trees which shed their leaves over the area in which the children play. The reason given is that the area is made very slippery by the leaf fall and if children are going to climb she needed to reduce the risk. ...read more.