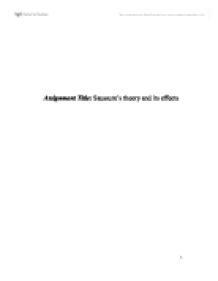 SAUSSURE'S THEORY AND ITS EFECT

Assignment Title: Saussure's theory and its effects Saussure's theory and its effects In this essay, first, I will outline the main principle of Saussure's theory of linguistics and explain what made him 'the father of Modern Linguistic'. At that point, I would like to draw attention to Saussure's linguistic theory which gives a systematic picture of what is a language, what the elementary principles and units that make it an independent system are. Secondly, I will describe how conception of language simplifies the approach to learning/teaching as a foreign language and how it strengthens an analytic method of studying. At the beginning of the twentieth century Ferdinand de Saussure (1857-1913) became unsatisfied with the way, linguistics was studied. He thought that historical linguistics; that analysed language across the time, and comparative Linguistics; that studied differences and similarities among languages, were not focusing on the real nature of language. Therefore, he has brought a new approach to the science of language parallel to his contemporaries Emil Durkheim in sociology and Sigmund Freud in psychology. As Saussure refused to accept the theory of language itself as a reflection of thought, he believed in the autonomy of language and was not happy with any nomenclature; the linguistic- philosophical theory that considered language as naming process. ...read more.

In that sense, we should look at Culler's example on that point. Explaining Saussure's theory of language, Culler gives the example of teaching process of colour terms in English to person of a non-European culture. "So we begin by showing him brown objects and telling him that they are brown. Since we want to be thorough, we have assembled a collection of a hundred brown objects of various kinds. Then, after having bored him and ourselves for several hours, we take him into another room and, to test his knowledge of 'brown', ask him to pick up all brown objects. He sets to work but seems to be having difficulty deciding what to select, so in despair we decide we haven't been thorough enough and propose to start again the next day with five hundred brown object" (Culler p.25). The main point of this example is that without something to contrast 'brown' with the student will not know what is brown whether it is the colour of object that is being labelled. Some teaching methods make a foreign language hard for students to learn. ...read more.

According to this theory sign is anything that tells us something beyond itself, e.g. four-time whistle by a referee announces the end of a football mach even if it is only a whistle. One of the strong sides of Saussure's linguistic theory is distinction between langue and parole. Langue concerns with the units and the rules of combinations that linguistic system was made up. On the other hand, parole looks at descriptions of speech acts. In this sense, Saussure's concentrated to langue instead of parole. 'Ultimately, langue has to be related to actual usages of individuals, for it has no reality apart from its validity as a reflector the system underlying acceptable usage, which a community manifests in its everyday speech. And this leads collective Saussuran concept of parole, the actual, concrete act of speaking on the part of an individual...' 3 As we have seen although, Saussure's theory of language is complex issue we can have some practical ideas for teaching/studying foreign language. Saussure's point of view about languistic contributes many aspects of language learning and teaching, and his ideas affected modern linguistics. In this sense, Saussure reasonable earned his place as a founder of modern linguistics. ...read more.