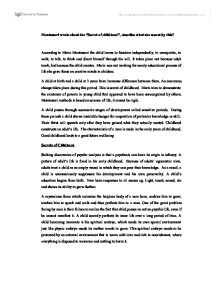 Montessori wrote about the "Secret of childhood", describe what she meant by this? According to Maria Montessori the child learns to function independently, to manipulate, to walk, to talk, to think and direct himself through his will. It takes place not because adult teach, but because the child creates. Maria was not working for nearly educational process of life she gave focus on creative minds in children. A child at birth and a child at 3 years have immense difference between them. An enormous change takes place during this period. This is secret of childhood. Maria tries to demonstrate the existence of powers in young child that appeared to have been unrecognized by others. Montessori methods is based on science of life, it cannot be rigid. A child passes through successive stages of development called sensitive periods. During these periods a child shows insatiable hunger for acquisition of particular knowledge or skill. Their thirst will quench only after they have gained what they actually wanted. Childhood constructs an adult's life. The characteristic of a man is made in the early years of childhood. Good childhood leads to a good future wellbeing Secrets of Childhood Striking discoveries of psycho analysis is that a psychosis can have its origin in infancy. A pattern of adult's life is fixed in his early childhood. Because of adults' egocentric view, adults treat a child as an empty vessel in which they can pour their knowledge. As a result, a child is unconsciously suppresses his development and his own personality. A child's education begins from birth. New born responses to all senses eg. Light, touch, sound, etc and shows its ability to grow further. A mysterious force which animates the helpless body of a new born, enables him to grow, teaches him to speak and walk and thus perfects him to a man. ...read more.

Why didn't you hide yourself? Then she realized that hiding is interpreted as finding something in a concealed point, in their proper place. All these show that nature endives a child with sensitiveness to order. 2. Learning through their five senses. The young child has a natural curiosity to explore the environment. A child's sensitive period lasts about five years. He observes the images from his environment through his senses. But he is still selective for his choice of images. A child starts from nothing and develops his reason, the specific characteristics of a man and he starts along this path even before he can walk of his own. A child tries to gather smallest of details, which usually adults ignores. From a child's point of view adults are dull and indifferent and not interested in minute details. In Maria's words, if a child could express himself, he would certainly tell us deep down he has little confidence in us just as we have confidence in him. A child acts from an inner impulse and he is selective in his choice of images. As he receives images from his environment, he organizes himself by recognizing pictures and fixing them in his memory. Thus he carries out the work of inner construction happily and peacefully. Montessori said "The tongue which he uses for speaking ,and the hands which he employs for work are more intimately connected with his intelligence than any other parts of body She refers them to as 'instruments of man's intelligence' In order to develop his mind a child must have objects in his environment which he can hear, touch and see. The human hand not only allows the mind to recall itself but also it enables the whole being to enter into special relationship with the environment He must develop through his inner movements. ...read more.

5 2.5 - 6 years Sensory refinement 6 3 - 6 years Susceptibility to adult's influence 7 3.5 - 4.5 years Writing 8 4 - 4.5 years Tactile sense 9 4.5 - 5.5 years Reading Absorbent mind is another aid that helps the child to develop. The absorbent mind explains the person by which the child gains knowledge from his environment. A child absorbs things from his environment.' Unconscious mind' which starts from birth to 3 years. The child learns everything without knowing that he is learning. Absorbent mind absorbs impressions from the surroundings. During this stage a child will learn everything from his environment, so Maria says that his environment should be interesting and attractive. 'Conscious mind 'is referred as the period from 3 years to 6 years. During this period a child absorbs knowledge from his environment and does a self Construction. He is conscious of his doings and he will be developing his mental functions. According to Maria "a child is born with an absorbent mind and this absorbent mind is form that is different from the mind of an adult"... A child's mind absorbs all things, cultures, values etc from his environment. In Montessori methods a child is open to the world and has given keys of explorations through sensory materials. It is considered as real work expeditions. It's based on a study of life and creativity. Thus sensitive period and absorbent mind plays a vital role in childhood. Life begins with a tiny cell which we can only see through with a microscope. But that tiny cell has got all the potential of future human being. The child is universal. According to Maria "the task of a child is to construct a man oriented to his environment, adapted to his time, place and culture". ...read more.