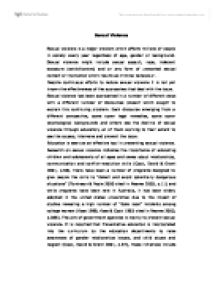 Sexual Violence Sexual violence is a major problem which affects millions of people in society every year regardless of age, gender or background. Sexual violence might include sexual assault, rape, indecent exposure (exhibitionism) and or any form of unwanted sexual contact or implication which results as criminal behaviour. Despite continuous efforts to reduce sexual violence it is not yet known the effectiveness of the approaches that deal with the issue. Sexual violence has been approached in a number of different ways with a different number of discourses present which sought to explain this continuing problem. Each discourse emerging from a different perspective, some cover legal remedies, some cover psychological backgrounds and others see the decline of sexual violence through education, all of them working to their extent to see the causes, intervene and prevent the issue. Education is seen as an effective tool in preventing sexual violence. Research on sexual violence indicates the importance of educating children and adolescents of all ages and sexes about relationships, communication and conflict-resolution skills (Cook, David & Grant 2001, p.56). there have been a number of programs designed to give people the skills to "detect and avoid potentially dangerous situations" (Tominson & Poole 2000 cited in Neame 2003, p.11) and while programs have been rare in Australia, it has been widely adopted in the united states universities due to the impact of studies revealing a high number of "date rape" incidents among college women (Koss 1998, Koss & Cook 1993 cited in Neame 2003, p.366). ...read more.

The national framework is based on five strategies as stated by Cook, David and Grant (2001, p.58): * understanding the process of the construction of gender; * Curriculum, teaching and learning * Violence and school culture; * Post-school pathways; and * Supporting change Key areas covered in this study refer to the interface between gender and violence, Harassment and bullying. In many schools gender construction is identified as the main factor in violent behaviour of boys. Carmody argues that Attitude does not necessarily reflect behaviour and this automatic assumption is a current problem within the Australian anti-violence programs (Department of Training, Education and Youth Affairs 2000 cited in Carmody 2006, p.467). dominant gender relations should not be enforced and there have been hardly any published evaluations which are targeted at gay men or lesbians (Carmody 2006, p.467), even tho this program is run in schools, it cannot simply be assumed that young adolescents do not have sexual identities, there are young gay men and lesbians in schools. Tell a Friend... It's Never Too Late Developed by the New South Wales child protection council, the tell a friend, it's never to late approach was a strategy aimed at preventing child sexual abuse. It includes a video and a sourcebook which is suitable for use with groups of children in schools (aged 8-13 year), counselling services and any other form of community groups and work in conjunction with other programs such as the protective behaviours program (Cook, David & grant 1002, p.59). ...read more.

Education as a discourse for sexual violence is effective to the extent that it focuses too much on "preventing" sexual violence, and not so much on intervention. Education might not always be the best way of preventing sexual violence in society, while victims of this crime benefit from education maybe as a path to recovery, it is legal discourses such as early police intervention which might be seen as a better remedy in dealing with this concerning issue. Educational discourses will not always be effective as we don't know how effective they really are, how it helps the victim or how it prevents the issue from happening in the first place. Biggest question lies within the outcome for offenders of sexual violence in terms of rehabilitation, it can almost be said that educational discourses don't recognise this term, how is education methods going to rehabilitate an offender better than legal remedies such as imprisonment? Overall it can be said that tis discourse achieves prevention very well as it outlines the risk factors and teaches those that are vulnerable how to reduce these risks to prevent sexual violence, it attempts to educate society at an early age to lower the number of potential offenders (Boys Talk Program) and looks at tertiary methods in dealing with victims and areas of recovery. 'education programs delivered to women focus on raising awareness of sexual assault and dispelling women's belief that "it wont happened to me", encouraging women to reduce or avoid "risk", and enhancing "protective" factors' (Neame 2003, p.11). ...read more.