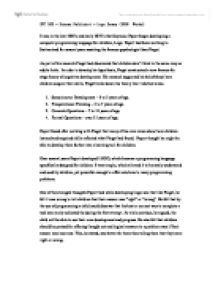 It was in the late 1960`s and early 1970`s that Seymour Papert began developing a computer programming language for children, Logo. Papert had been working in Switzerland for several years assisting the famous psychologist Jean Piaget. As part of his research Piaget had discovered that children don't think in the same way as adults think. In order to develop his hypothesis, Piaget constructed a now famous for stage theory of cognitive development. His research supported his belief about how children acquire their skills. Piaget broke down his theory into 4 distinct areas. 1. Sensorimotor Development - 0 to 2 years of age. 2. Preoperational Thinking - 2 to 7 years of age. 3. Concrete Operations - 7 to 11 years of age. 4. Formal Operations - over 11 years of age. Papert found after working with Piaget that many of his own views about how children learned and acquired skills reflected what Piaget had found. ...read more.

It also allowed the child to teach the program new commands. This introduced a new level to the learning experience as the child had to thing about the information it was going to "teach" to the computer. Before this, a floor turtle was used in a similar way, a very visual way to make children understand the mistakes they were making and the steps they needed to take to solve those problems. There are several different LOGO based computer programs available. They offer a similar interface to the turtle graphics but differ slightly in that they also offer very powerful list processing. With the advent of the world wide web, logo reached an even greater audience. It has found its way into educational establishments in countries all around the world. It has also allowed the integration of certain web based elements to logo. This allows students to display their work online and take part in discussion forums about their projects with students from different schools and even different countries. ...read more.

YoYo was developed to be a "Java for Children" but also incorporates several elements of the original logo language. Although not yet available to the public, yoyo has already made some startling advances in programming for children. Students at MIT have used the yoyo language to program versions of the star logo software package. Cocoa is again similar to the original design of logo but with the advantage of having a compiler which works in a similar way to Microsofts Front page allows users to construct websites without actually needing to write any html code. The code in cocoa package is generated in response to the requirements of the end user. However, the main disadvantage of Cocoa is its failure to teach any basic skills. As it uses no writing, even those who are illiterate can still use the software. With Logo, boxer and yoyo the student is still practicing basic reading and writing skills. Although it still may have a place in education today, but because of its lack of basic skill use it is suggested it has no real place in today's ICT curriculum. ...read more.