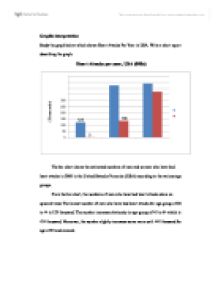 Graphic interpretation Study the graph below which shows Heart Attacks Per Year in USA. Write a short report describing the graph. Heart Attacks per year, USA (000s) The bar chart shows the estimated numbers of men and women who have had heart attacks in 2006 in the United Stated of America (USA) ...read more.

Overall, the numbers for both the men and women increase from 29 to 65 years old and onward. It is because some of them may have stress, unhealthy diet and even hereditary heart disease which can trigger off heart attacks. In conclusion, there are more men than women are affected by the unhealthy lifestyles from youth to old age and metabolism rate decreases which due to hormonal deficiency in the people. It then causes the numbers of men and women who have had heart attacks increase with age. ...read more.