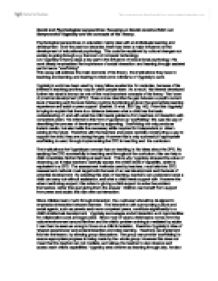 Social and Psychological perspectives: focusing on Social constructivist Lev Semyonovich Vygotsky and the concepts of his theory.

Social and Psychological perspectives: focusing on Social constructivist Lev Semyonovich Vygotsky and the concepts of his theory.

Psychological perspectives on education mainly deal with an individuals learning and development. Over the past two decades, there has been a major influence on the development of educational psychology. This could be explained by cultural changes our society is going through e.g. the boom of computer technology.

Lev Vygotsky’s theory plays a key part in the influence of educational psychology. His work clearly emphasises the importance of social interaction and learning through assisted performance ‘’scaffolding’’.

This essay will address the main elements of his theory, the implications they have to teaching and learning and bearing in mind some criticisms of Vygotsky’s work.

Vygotsky’s work has been used by many fellow academics for centuries, because of his interest in teaching and they way in which people learn. As a result, his interest developed further into what is known as one of the most important concepts of his theory. The ‘zone of proximal development (ZPD)’, ‘these zones describe the gap between a pupil’s current level of learning and the level he/she could be functioning at given the appropriate learning experience and adult or peer support’ (Bartlett, S et al, 2001 pg 142). From this Vygotsky is trying to explain that there is a distance between what a child has the basic understanding of, and with what the child needs guidance from teachers or interaction with competent peers. He referred to this form of guidance as ‘scaffolding’; this was his way of describing the process of development by supporting. Scaffolding not only produces instant results, but also instils the necessary skills required for independent problem solving in the future.Therefore with the teachers and peers carefully constructing a way to support the child, they are closing the gap. However this is only successful if appropriate scaffolding is used, through implementing the ZPD in teaching and the curriculum.

The implications the Vygotskyan concept has on teaching, is his ideas about the ZPD. By applying the ZPD successfully in teaching and throughout the curriculum, this can help a child consolidate his/her thinking at each level. This is why Vygotsky stressed the value of observing, as it helps teachers carefully assess the child’s level of capability, which is equivalent to a ZPD. The assessment methods used by teachers, must take into ZPD. Assessment methods must target both the level of actual development and the level of potential development. By adopting this style of teaching, teachers can understand what a child can carry out without assistance, and what a child needs support with. However the when mentioning support, this refers to giving a child support to solve the problem themselves, rather than just giving them the answer. Children can benefit form support from peers and adults, this can seen as interaction.

Since children learn much through interaction, the curriculum should be designed to emphasise interaction between learners. The interaction with surrounding culture and social agents, such as parents and more competent peers, contribute significantly to a child's intellectual development. Vygotsky encourages social interaction and opportunities for collaborative work amongst peers. Since most of what a child learns comes form the culture/environment around him/her and the child's problem solving is mediated by adults. It can then be seen as wrong to focus on a child in isolation, therefore Vygotsky’s idea of ‘shared experiences’ and social interaction promotes learning. Teachers can implement this into the lesson, by allowing group discussions. The group can provide ‘scaffolding’ to ensure appropriate progress is being made by the whole group. However this does not mean that the teacher can not mediate, as it allows the teacher to also observe and assess each child’s capabilities. Vygotsky sees children as learning through play, he also understands that ‘doing’ is not always the case. Children can also learn through talk, this not only allows the children to develop communication skills. But it also prepares them for the future, since socialisation skills are very important part of life. ‘thus Vygotsky’s work highlights the importance of talk as a learning tool (Bartlett, Set al 2001 pg 139). By interaction with peers and adults, the child can build cognitive development and language is better used.

This is important because children learn through many ways, communicating helps them to express themselves. By language development this can develop their knowledge of the culture around them. The conversation should not be limited as to such limitations can minimise development, the child should rather be encouraged. By teacher’s observing the conversation in the classroom, he/she can gain an understanding of the ZPD. In relation to what the child understands and what the child is having difficultly understanding. The way in which individuals understand something, and they way in which they can talk about it may differ. This is why it is not only important to use language, but it is also important to learn language.

As learners experience the wide variety of functions and forms of language, they internalise the way their society uses language to represent meaning. So they are learning language at the same time they are using language to learn (Bartlett, S, et al 2001 pg 231)

However language not only is essential for the use in education or the classroom, but it is important in society, since we use it to share experiences. Because we heavily rely on it day-to-day it can be constrained by our surroundings, so the further development of language is necessary.

While on the other hand Vygotsky’s theory has had major impact and influenced the style of many fellow academics, since the last couple of centuries. Nevertheless Vygotsky’s work also carries with it some criticisms, most commonly he is criticised for not including biological factors to any of his studies.

Wertsch (1985) ‘…since he assumed that the natural factors play the major role in early ontogeny, and that the cultural forces take the leading role later on’.

Vygotsky is also criticised by (Wertsch, 1985) for not developing his theory further, but Wertsch takes into consideration his death was the reason for the lack of further development. Hence, the criticisms of Vygotsky still do not affect the tremendous influence on educational psychology, as witnessed by numerous books, book chapters and journal articles.

Vygotsky’s work has helped many to develop and organise training methods for use in everyday life. In order to improve our communication and relationship skills, as well as developing the skill of independent learning. Vygotsky’s ideas can used to both support children in their learning, as well as help them gain control of their learning. He sees school and all as a place for learning and thinking. In addition he highlights the importance of the relationship between adult and child, as he sees this as the central element in the educational process. Looking at Vygotsky’s theory, the ideas put across and the methods that can be used to develop the child’s thinking and performance seem influential in the curriculum today. The use of language and social interaction, do not only play a key part in our education. But they are very crucial in society, and Vygotsky’s theory can help develop within schools and out-side of school.