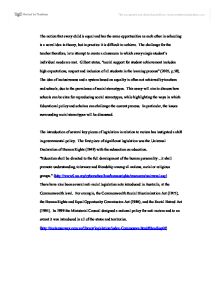 The notion that every child is equal and has the same opportunities as each other in schooling is a novel idea in theory, but in practice it is difficult to achieve. The challenge for the teacher therefore, is to attempt to create a classroom in which every single student's individual needs are met. Gilbert states, "social support for student achievement includes high expectations, respect and inclusion of all students in the learning process" (2005, p.58). The idea of inclusiveness and a system based on equality is often not achieved by teachers and schools, due to the prevalence of social stereotypes. This essay will aim to discuss how schools can be sites for reproducing social stereotypes, while highlighting the ways in which Educational policy and scholars can challenge the current process. In particular, the issues surrounding racial stereotypes will be discussed. The introduction of several key pieces of legislation in relation to racism has instigated a shift in governmental policy. The first piece of significant legislation was the Universal Declaration of Human Rights (1949) with the subsection on education. "Education shall be directed to the full development of the human personality...it shall promote understanding, tolerance and friendship among all nations, racial or religious groups." (http://www0.un.org/cyberschoolbus/humanrights/resources/universal.asp) There have also been several anti-racial legislation acts introduced in Australia, at the Commonwealth level. For example, the Commonwealth Racial Discrimination Act (1975), the Human Rights and Equal Opportunity Commission Act (1986), and the Racial Hatred Act (1995). ...read more.

There are four main ways the schooling system still reproduces racial inequalities. They are: the curriculum and the resources chosen, multicultural events, the hidden curriculum, and teacher training. These examples will be discussed in terms of different ethnic group case studies. The curriculum poses many challenges for teachers of what to include and what has to be omitted. More often than not due to time constraints, teachers cannot spend as long as they would like on particular topics. Thus certain important information could be eliminated about from particular ethnic group's viewpoints. Marsh states, "teachers need to help students identify bias and to seek information from a wide variety of sources so that many different viewpoints can be considered" (2008, pg.226). In addition, the selection of resources plays an important role in reproducing racial stereotypes. The over-reliance by some teachers in using the textbook as the primary resource, can lead to students learning only about facts and the 'dominant' position in society. Clark illustrates this, "...syllabuses and textbooks that are heavy on facts and light on analysis", (2007, p.16), merely produce students that do not know how to critically think and challenge stereotypes. In turn, tests that are set by the State government act as important measures for academic success. These tests however, often favour the majority of the students in the school- not the minority. In Teese's article he gives the example of discrimination in testing in public schools in North Carolina, America. ...read more.

There are several ways in which schools can challenge the inequalities that exist in relation to racism, but concurrently they need to eradicate the ways in which these are produced. The policies as both a Federal and State level, illustrate a commitment to eliminate racial inequalities in the schooling system. The theories proposed by Kumashiro and Ladson-Billing present several solutions to help teachers and schools to eliminate racism as well. Despite, the theories and the policies encouraging ways in which existing racial inequalities can be challenged, it is quiet difficult to introduce these in practice. For example, the Muslim student's experiences demonstrated how a better understanding of their culture and religion, is needed in mainstream schooling. It is doubtful if racial inequalities will cease to be reproduced in schooling, as it will require a significant commitment from the students, teachers, and the community as a whole. The goal of any school is to achieve an environment in which every student feels included. This can prove to be quiet a challenge for teachers, students and the wider schooling community. If a school wants to be seen as an anti-racist school, they will need to invest time and money in teacher training, develop the curriculum in conjunction with the students and the wider community, and re-educate every student to critically challenge what they are learning. It will be interesting to see whether or not this can be achieved or whether racial inequalities will continue to be reproduced in the schooling structure. ...read more.