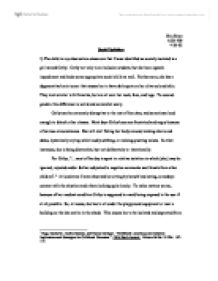 Social Isolation - observing a girl who has a speech impediment and lacks some appropriate social skills as well, she has a degenerative brain tumor that causes her to have dark spots on her olive-colored skin

Erin Ernst ALD 328 4-26-02 Social Isolation 1) The child in my observation classroom that I have identified as socially isolated is a girl named Cathy. Cathy not only is an inclusion student, but she has a speech impediment and lacks some appropriate social skills as well. Furthermore, she has a degenerative brain tumor that causes her to have dark spots on her olive-colored skin. They look similar to birthmarks, but are all over her neck, face, and legs. To second-graders this difference is weird and somewhat scary. Cathy can be extremely disruptive to the rest of the class, and sometimes loud enough to disturb other classes. Most days Cathy becomes frustrated and angry because of various circumstances. She will start flaling her body around, kicking chairs and desks, hysterically crying while loudly sobbing, or making grunting noises. In other instances, she is being distractive, but not deliberately or intentionally. For Cathy, "...most of the day is spent in relative isolation in which [she] may be ignored, rejected and/or further subjected to negative comments and threats from other children1." At lunchtime I have observed her sitting by herself and eating, somedays content with the situation and others looking quite lonely. To make matters worse, because of her medical condition Cathy is supposed to avoid being exposed to the sun if at all possible. ...read more.

Furthermore, Cathy's loud, immature behavior is not the norm of the classroom generally, and is usually viewed as unacceptable by her peers. There are still further characteristics of social isolation, rejected and neglected, unique to Cathy that are prevalent on a day-to-day basis such as: crying too easily and throwing fits in the classroom, which could be a sign that she is insecure and unable to cope with her condition, clinging to the teacher (so much that he becomes annoyed sometimes), difficulty "reading" others and initiating conversation, and although this is not a direct characteristic or behavior, there seems to be a direct correlation between a student's status (popular, unpopular, etc.) in the classroom and becoming socially isolated, which is without a doubt prevalent in Cathy's situation. Mentioned above, Cathy lacks proper social skills that aid in initiating play and friendship. She is usually less hesitant and more blunt in her requests, which turns the other children away. Since children need a social group of friends, and others who accept them, to learn from and teach them social skills, I foresee the adjustment being very difficult for Cathy because second graders are just now forming unique opinions each other. Up until now, for the most part, everyone could get along and play together. ...read more.

teacher that is in a different classroom, and the school counselor because he come into the classroom once a week and teaches the students various social skills. Other people that should without a doubt become involved are the speech therapist (that works for the school) that Cathy sees once a week, the principal and other administrators for the school, Cathy's case worker from social services, and of course her mother and extended family, although I am not sure how much support would actually be followed through from them. There are numerous strategies that could be implemented in an attempt to socially integrate Cathy, but some that I believe would be of the most benefit to her are: giving her positive attention more, rather than so much negative attention, providing social skills training through role playing and class discussions, assigning groups and teams, rather than allowing the students to choose their partners, and making the student work cooperatively with their classmates, reprimanding those who make fun of anybody in the classroom, not just Cathy, and having teachers model respect toward one another, and toward their students as well, with hopes that that behavior with rub off on the students. 1 Page, Randy M., Andria Scanlan, and Nancy Deringer. "Childhood Loneliness and Isolation: Implications and Strategies for Childhood Educators." Child Study Journal. Volume 24/No. 2/1994. 107-118. ...read more.