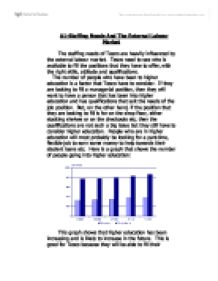 A1-Staffing Needs And The External Labour Market The staffing needs of Tesco are heavily influenced by the external labour market. Tesco need to see who is available to fill the positions that they have to offer, with the right skills, attitude and qualifications. The number of people who have been to higher education is a factor that Tesco have to consider. If they are looking to fill a managerial position, then they will want to have a person that has been into higher education and has qualifications that suit the needs of the job position. But, on the other hand, if the position that they are looking to fill is for on the shop floor, either stacking shelves or on the checkouts etc, then the qualifications are not such a big issue but they still have to consider higher education. People who are in higher education will most probably be looking for a part-time, flexible job to earn some money to help towards their student loans etc. ...read more.

This may be problematic for Tesco if they are looking to fill a managerial position, as there will be a shortage of qualified people. Here is some recent employment figures plotted on a graph: This graph shows that the number of men and women who are unemployed seemed to be decreasing between 1997 and 2000 but from 2000 until 2002, the number seems to be fluctuating for both sexes. It is hard to predict what will happen in the future due to the frequent fluctuations but taking an overall look at the information collected over the six years in which the information was collected, it seems to be decreasing gradually. This means that Tesco will need to make their managerial jobs look attractive to the few people out of the unemployed population. However, they should not have too much trouble finding people to work on the shop floor. ...read more.

It shows that the majority of the population are between the ages of 30 and 50, which of course in turn means that the majority of the population working for Tesco is around this age group. There also seem to be quite a few younger people so Tesco will have to consider using them for part-time employment. There are not so many older people but Tesco still need to consider what to do about their retirement. Tesco will also need to consider birth rates and death rates in order to accurately predict how many people they should recruit at which times. Here is a table that shows this data: This table also shows the mortality rates. These figures allow Tesco to plan for the future by studying these figures. They can compare the overall figures for birth at the present day with those of the past and calculate some projected figures for the future. ...read more.