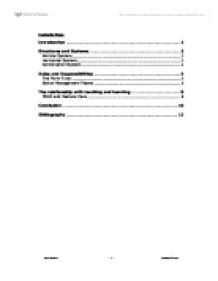 Structures and Support Systems in School

Contents Page Introduction 2 Structures and Systems 3 Vertical System 3 Horizontal System 3 Combination System 4 Roles and Responsibilities 5 The Form Tutor 5 Senior Management Teams 6 The relationship with teaching and learning 8 PSHE and Pastoral Care 8 Conclusion 10 Bibliography 12 Introduction Hamblin (1982) states that 'An effective pastoral system is more than a device for providing emotional first-aid for adolescent tensions in a complex society, or a welfare activity for alleviating poor home conditions.' He then goes on then goes on to share his ideas that the true failure of secondary schools lies in the field of learning and that inappropriate teaching methods, rather than indiscipline, can cause sterile relationships. Pastoral care in education is a complex and diverse issues, during the course of this paper some of the areas of pastoral care will be examined against past theories and related to present day teaching. Structures and systems in school will be studied followed by the roles and responsibilities of key personnel and also the relationships between teaching and learning. During the course of this paper some research has come not only from theories but will also relate to: my own schooling, my first placement which is an FE College and research that I have carried out into a secondary comprehensive school in Derbyshire. Structures and Systems 'While there are lots of ways of making the actual divisions in a big school, they tend to crystallise into two main groups. ...read more.

their form, and the children getting to know the tutor, sufficiently well for them to feel comfortable in bringing such problems to the tutor in the first instance.' (Collins, 1999) The form tutor has a vital role to play in pastoral as they are often the first port of call for students to raise problems whether socially or academically. The tutor has to have a bond with the pupils or else the student will simply not seek the tutors advice and guidance and if this happens we could almost say that the tutor has failed in their role. Tutors can often be split by those which are reactive and those which are pro-active. The re-active tutor is one whole is approachable and one that will listen and sympaphise with pupils who bring problems to their attention. This requires the teacher to be accepting and approachable and have key skills in listening, negotiation, guidance and counselling. The pro-active tutor is based on the adage prevention is better than cure. It is this kind of approach that has lead to the development of the PSHE curriculum and preparing pupils for problems which may arise in their time at school and in their future lives. There is a big difference in the tasks that have to be carried out as the education year's progress. From my observations in 3 schools of differing ages I have seen that in the younger years of secondary education more time is spent consulting students about social worries and academic preparation for their forthcoming SAT's. ...read more.

In some instances I have found these packs to be of little use and time on PSHE spent to be relatively ineffective. The older pupils witnessed, see this time as a waste and feel it is of little importance compared to the large workload they have to complete for their a-levels. Conclusion The Pastoral system in any school has a vital role to play in providing the best education available to children today. The structure and systems in which schools use are crucial in getting the right balance of year groups and diversity of children to enable integration into the school in their early stages. We have seen a shift from early comprehensive schools adopting a vertical pastoral structure to most schools now using a combination structure that they have devised. Roles and Responsibilities are constantly changing in schools and teachers and senior management teams are not only teachers but would also say that they are sometimes councillors and parental models. The role of pastoral work in school is vital pupil's future and can help them to integrate with post school life in the later schooling years. Senior management teams are not only there to provide discipline in schools but also coach and help new teachers in their roles as form tutors and pastoral carers. The role of the pastoral system and its development over the years has had a great positive effect on pupil's education and with its continual development in schools there will be greater rewards to be gained. ...read more.