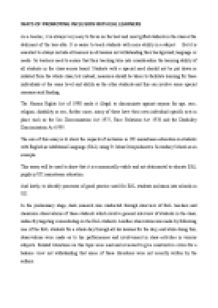 ﻿WAYS OF PROMOTING INCLUSION WITH EAL LEARNERS As a teacher, it is always very easy to focus on the best and most gifted students in the class at the detriment of the less able. It is easier to teach students with more ability in a subject. But it is essential to always include all learners in all lessons not withstanding their background, language or needs. So teachers need to ensure that their teaching take into consideration the learning ability of all students in the class across board. Students with a special need should not be put down or isolated from the whole class, but instead, measures should be taken to facilitate learning for these individuals at the same level and ability as the other students and this can involve some special measures and funding. The Human Rights Act of 1998 made it illegal to discriminate against anyone for age, race, religion, disability or sex, further more; many of these have their own individual specific acts in place such as the Sex Discrimination Act 1975, Race Relations Act 1976 and the Disability Discrimination Act 1995. The aim of this essay is to show the impacts of inclusion in UK mainstream education on students with English as Additional Language (EAL) using St Johns Comprehensive Secondary School as an example. This essay will be used to show that it is economically viable and not detrimental to educate EAL pupils in UK mainstream education. And lastly, to identify processes of good practice used for EAL students inclusion into schools in UK. In the preliminary stage, desk research was conducted through interview of EAL teachers and classroom observations of these students which involve general interview of students in the class, indirectly targeting concentrating on the EAL students. Another observation was made by following one of the EAL students for a whole day through all his lessons for the day, and while doing this, observations were made as to his performances and involvement in class activities in various subjects. ...read more.

and learning in schools, but doing otherwise would bring about changes in other dimensions as it will help to sustain polices and practices put in place. National strategies recommended that children should be able to use their first language in the classroom to develop their ideas to aid English attainment. {Great Britain 2011}. It can be argued that too many schools cultures are yet to imbibe this into their system, and this world have provided monolingual students opportunity and benefit of learning another language. [5] The practicality of this can be argued as most schools always have EAL from many nationalities and school authority would not want to be seen as given priority to one national over others. But creating an inclusive culture will raise more accepting generation of pupils? rich in environmental cultures. {Leung 2001). To a large extent, it is beneficial to allow students to develop their fist language alongside English language. It behoves on the community and schools to ensure that the mother tongue is maintained and developed to reap these benefits as skills developed from first language can be transferred to other language. Notwithstanding of these benefits of bilingualism, research have shown that pupils? with EAL find it more tough to comprehend words despite being able to read them accurately and were less able to make use of resources? to help them. WHOLE SCHOOL PRACTICE In the course of this essay, two EAL teachers were interviewed. The first one is the coordinator of the EAL department and while second is a teacher in the department. The whole school practice for EAL students and other students in needs can be adjured based on the practice on ground. The starting point for a new EAL student is to undergo an initial test for English and compare the result to the benchmark already set. The student is then placed in the appropriate position, or level based on the traffic light system of green, amber, and red. ...read more.

Low self-esteem in a pupil may then have a detrimental effect on their academic achievement. Government policy stresses the importance of pupils with EAL spending the majority of their time in the mainstream classroom (Overington, 2012); however, this need to be handled carefully as the new cultural environment may be intimidating for the pupil (Frederickson and Cline, 2009).[7][8] In order to accommodate this, a ?buddy? system can be a good idea, pairing the pupils with another pupil ideally speaking the same language to help to integrate the pupil into school life (Parker-Jenkins, 2007; Ofsted, 2011). To overcome this, it needs to be ensured that the classroom, including the pupils and teacher, is a welcoming environment in which all pupils feel safe and secure As teachers we do not solely interact with the children. What about parents or carers and the role they have to play in the child?s education? It is vital that there is high quality communication with parents in order to develop understanding and co-operative relationships which will be of benefit to the child. We are aware that there is strong correlation between the relationship with parents, carers and communities of the child to the pupil succeeding in school and Ofsted (2009, 2011) have found that practice is most effective when parents are engaged in school life, understanding that they do not have to speak English at home and that their first language is valued. Ofsted found that pupils are more likely to learn through socialisation and interaction with pupils and it is important that parents understand this. In conclusion, whilst bilingualism in the classroom can be a positive attribute, it largely depends upon how the school policy and its implementation accommodate the pupils with EAL. Research shows that there is a need for sensitivity in the school policy alongside a whole school approach with the individual pupil and their needs at its heart. Ensuring our lessons are planned to effectively meet the needs of pupils with EAL will mean that more pupils are enabled to access the curriculum. ...read more.