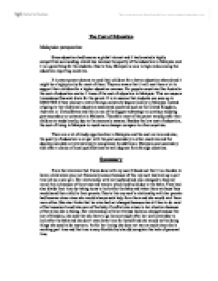 The Cost of Education

The Cost of Education Malaysian perspective: Since education had become a global interest and it had created a highly competitive surrounding, which has increase the quality of the education in Malaysia and it is a good thing for the students. Due to this, Malaysia is now in high ranks among the education exporting countries. It is every parent dreams to send their children for a better education aboard and it might be a high priority for most of them. They are aware that it will cost them a lot to support their children for a higher education oversea. For popular countries like Australia the cost of education can be 4 times of the cost of education in Malaysia. This can cause a tremendous financial drain for the parent. It is to assume that students can save up to RM10'000 if they choose to entire foreign university degree locally in Malaysia instead of going to the traditional education-associated countries such as the United Kingdom, Australia or United States and this is one of the biggest advantage to continue studying post-secondary or university in Malaysia. ...read more.

They had also divide their time by taking turns to look after the baby and when there are busy they would send their child to their parents. Due to this my aunt's relationship with her parents had became closer since she would always seek help from them and she would visit them more often. She also thinks that he roles had not changed because she still has to do most of the housework and take care of the baby. Conflict also arises in her situation because of the stress she is facing. Her relationship with her friends had also change because the lost of freedom, she says that she have to go home straight after her work everyday to look after the baby and she don't even have time for herself and she would not be doing things she used to do anymore. As for her timing she does not worry much since she is working part time and the time is very flexible but she did complain the lack of personal time. ...read more.

Consequently most of the couple that have child would have more burden and it is really hard form them to spend time with each time because of the responsibility that they have to face because of the additional of new member in their family. Due to the additional of the member the couple would also need additional cost to maintain the family expenses. Some of the expenses might be the cost of food, clothing, and equipment for the infant. Others occur in the near future, such as day-care costs, and funding post-secondary education for their children in the distant future. The couple would also face problem with the time that they spend together and they could not do the things they often do before the birth of their child. Due to this conflict and stress arise and the couple would start fighting and arguing for stupid stuff like the division of household jobs and the childcare. One of the parents' tasks is to work through these changes in the best possible manner for themselves and their child. This can be the most challenging developmental task of new parents. ...read more.