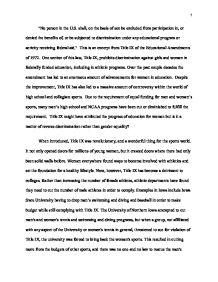 The Effects of Title IX of the Educational Amendments 1972 on Sports Provision in the USA.

"No person in the U.S. shall, on the basis of sex be excluded from participation in, or denied the benefits of, or be subjected to discrimination under any educational program or activity receiving federal aid." This is an excerpt from Title IX of the Educational Amendments of 1972. One section of this law, Title IX, prohibits discrimination against girls and women in federally funded education, including in athletic programs. Over the past couple decades the amendment has led to an enormous amount of advancements for women in education. Despite the improvement, Title IX has also led to a massive amount of controversy within the world of high school and collegiate sports. Due to the requirement of equal funding for men and women's sports, many men's high school and NCAA programs have been cut or diminished to fulfill the requirement. Title IX might have attributed the progress of education for women but is it a matter of reverse discrimination rather than gender equality? When introduced, Title IX was revolutionary, and a wonderful thing for the sports world. It not only opened doors for millions of young women, but it created doors where there had only been solid walls before. Women everywhere found ways to become involved with athletics and set the foundation for a healthy lifestyle. Now, however, Title IX has become a detriment to colleges. Rather than increasing the number of female athletes, athletic departments have found they need to cut the number of male athletes in order to comply. ...read more.

the institution is "fully and effectively" accommodating the interests and abilities of the underrepresented sex. (Reynolds 2003) The Departments Office for Civil Rights encouraged schools to look at the three-prong test and consider which of the tests best suit their institution. This allowed each institution to have a range of flexibility in complying with Title IX. The problem is that many schools felt the only way to comply was to go along with the substantial proportionality prong. As a result, in order to get the numbers to be equal to that of the student body, many schools have had to cut many men's programs. Despite the popular use of only one of the three prongs, the Departments Office for Civil Rights stands tall with their system. They constantly attempt to make it clear that each of the three prongs of the test is an equally sufficient means of complying with Title IX, and no one prong is favored. They also attest that it is not Title IX that is forcing the cut backs in men's sports but those put in a place of decision making at each institution who chose how it is that they want to comply with Title IX's three-prong test. In some cases a schools decision to cut sports in order to comply with Title IX has led to a lawsuit. An example of this would be Miami University. The university formed a committee to address the issue of Title IX compliance and hired a consultant as well. ...read more.

Many people feel that these recommendations would further complicate the compliance issues because they would allow universities greater freedom in demonstrating that they are complying with the 1972 law. In a statement after reading the commission's recommendations, Myles Brand, the new leader of the NCAA, said, "as well-intentioned as the commissioners were, the recommendations simply provide too much opportunity for mischief in the implementation of Title IX (Commission's 2003)." The athletic director for women at the University of Texas, Christine Plonsky had agreed with Brand. "The commission had a difficult task, given the time frame," Plonsky said. "It was a comfort to read that Secretary Paige will not consider non-unanimous recommendations. I also agree with Dr. Brand, however, that any alteration of the law would negatively impact equity in opportunities and would be harmful." (Commission's 2003) The commission also acknowledged the problem of schools attempting to comply with Title IX by the elimination of men's teams. The Department of Education released a statement that included they will view the elimination of men's teams as a "disfavored practice" for achieving Title IX compliance. (Reynolds 2003) In general the effects of Title IX have been very positive in equalizing the playing field for both men and women. The debates about Title IX will certainly continue as the Department of Education has noticed some flaws in the way that certain institutions choose to comply with Title IX. Hopefully they will somehow figure out a way to ensure the safety of men's sports while at the same time allowing women's sports to continue growing as they have been since the introduction of Title IX. ...read more.