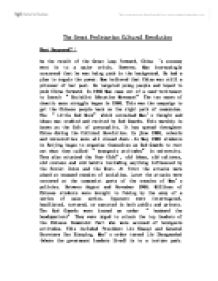 The Great Proletarian Cultural Revolution What Happened? : As the result of the Great Leap Forward, China 's economy went in to a major crisis. However, Mao increasingly concerned that he was being push in the background. He had a plan to regain the power. Mao believed that China was still a prisoner of her past. He targeted young people and hoped to push China forward. In 1962 Mao came out of a semi-retirement to launch " Socialist Education Movement" The ten years of chaotic mass struggle began in 1966. This was the campaign to get the Chinese people back on the right path of communism. The " Little Red Book" which contained Mao's thought and ideas was studied and recited by Red Guards. This warship is known as the Cult of personality. It has spread throughout China during the Cultural Revolution. In June 1966, schools and universities were all closed down .In May 1966 students in Beijing began to organize themselves as Red Guards to root out what they called " bourgeois attitudes" in university. They also attacked the Four Olds", old ideas, old cultures, old customs and old habits including anything influenced by the Soviet Union and the West. ...read more.

They fabricated various excuses to distract the flow of production. They condemned a basic theory that production power decides the relation of production and the character of a society as "Revisionism". Production and construction was destroyed terribly, besides, a birth control program was abandoned. Consequently the population of China increased rapidly, and the quality of civil life deteriorated rapidly As far as food concerned, annual consumption of grain per head of 1966 and 1976 decreased as 1966 was 190.5 kilogram, 1976 was 191.5 kilogram when compared with that of 1956, 204.5 kilogram that was the best. In the field of clothes, annual consumption of cotton per hear decreased in 1966 as 20 feet and 1976 as 23.7 feet, compared with that of 1959, 29.2 feet that was the best. Where housing was concerned, because the investment for housing construction decreased vastly, the people living in cities worried about housing. And the CR made relation of national economy loses their balance. Heavy industry occupied 32.7% as a whole in 1966, the figure raised to 38.9% in 1976. On the other hand, that of agriculture decreased from 35.9% to 30.4%, at the same time light industry also decreased from 31.4% to 30.7%. ...read more.

The exile was supported by Mao's unique method (a communist idea coming from the Soviet), which said, "The more books you read, the more stupid you become", "A school curriculum should be half", and "A normal school term should be short". The idea was that educational substance should be simpler and students should be reeducated practically. In this way about four millions urban graduates were transferred to the countryside or wilderness. Youth faced various problems there. In the way of life, it was hard to adjust them to self-sufficiency. Above all there were many problems in terms of food, housing, and medicine. What did the campaign for students bring in the end? First there was a lack of good talent. There were about a million college students who had neglected their studies, senior high school students were more than two millions. In some regions all the high school graduates were transferred to the countryside, and senior high schools closed completely. More than sixteen million students were forced to do manual labor in the countryside all over China. Some students recommenced with their studies after the revolution, but most students' remained at high school level or below. Difference between the educational levels of China and that of the world grew with the campaign. Political Results ...read more.