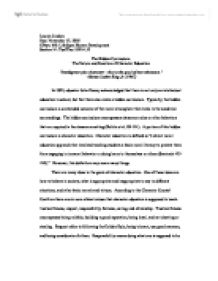 The Hidden Curriculum:The Nature and Function of Character Education

Lauren Lindros Due: November 17, 2005 GPsyc 160: Life Span Human Development Section 14: Tue/Thur 5:00-6:15 The Hidden Curriculum: The Nature and Function of Character Education "Intelligence plus character - that is the goal of true education." -Martin Luther King Jr. (1947) In 1933, educator John Dewey acknowledged that there is not only an intellectual education in school, but that there also exists a hidden curriculum. Typically, the hidden curriculum is unintended outcome of the moral atmosphere that exists in the academic surroundings. The hidden curriculum encompasses classroom rules or other behaviors that are required in the classroom setting (Bohlin et al. 89-114). A portion of this hidden curriculum is character education. Character education is defined as "a direct moral education approach that involved teaching students a basic moral literacy to prevent them from engaging in immoral behavior or doing harm to themselves or others (Santrock 455-456)." However, this definition may mean many things. There are many ideas to the goals of character education. One of these ideas are how to behave in society, what is appropriate and inappropriate to say in different situations, and other basic morals and virtues. According to the Character Counts! Coalition there are six core ethical values that character education is supposed to teach: trustworthiness, respect, responsibility, fairness, caring, and citizenship. ...read more.

Students must be encouraged and rewarded for acting in good character so they learn that this is the correct way to act. The next principle is that character must be defined to include the thoughts, feelings, and behaviors of the individual. Even though character education is part of the hidden curriculum, the ideas and concepts should at one point be defined to the students. This could be included in a lesson in any subject that it has relevance, or even when explaining classroom rules (to explain why there are specific rules). The third principle states that the school must use a comprehensive, proactive, and effective approach to character development. According to the forth and fifth principles the school must also create a caring school community and provide students with opportunities for moral actions. Students should have the opportunity to practice using good character development with teachers and other students. The sixth principle states that the academic curriculum must respect all the students, develop their character, and help them to succeed. The seventh principle has the school strive "to foster students self motivation (The Eleven Principles)." Schools should get students to want to have good character. Principles eight, nine, and ten assert that all persons around the students should share responsibility for character education. ...read more.

Also, if students already have learned some components of character education then it will also make the classes that I will be teaching less chaotic, and I will be able to have fewer worries about things such as students cheating on exams or talking while I am trying to teach. Therefore, character education does not only benefit the students (especially in the future) but benefits their teachers. Character education, and other parts of the hidden curriculum, is a set of extremely important lessons in school. The things that students learn about the difference between 'right' and 'wrong' in society will help them beyond their years in the classroom. Resources Berkowitz, Marvin W. "The Science of Character Education." Hoover Press: Damon. 5 Nov. 2005 <http://www-hoover.stanford.edu/publications/books/fulltext/character/43.pdf>. Bohlin, Karen E. , and Kevin Ryan. Building Character in Schools. San Francisco: Jossey-Bass Publishers, 1999. Boostrom, Robert. "The Nature and Functions of Classroom Rules." Curriculum Inquiry 21.2 (1991): 193-216. "The Eleven Principles." 2005. Character Education Partnership. 14 Nov. 2005 <http://www.character.org>. "Growing Responsible, Respectful Children." Character Education: Teaching Kids to Care. University of Illinois Extension. 5 Nov. 2005 <http://www.urbanext.uiuc.edu/SchoolsOnline/charactered.html>. Santrock, John W., ed. A Topical Approach to Life-Span Development. 2nd ed. New York: McGraw Hill, 2005. Singh, Gloria R. . "How Character Education Hlpes Students Grow." Educational Leadership 59.2 (2001): 46-49. "The Six Pillars of Character." CC!. 2005. Character Counts! Coalition. 13 Nov. 2005 <http://www.charactercounts.org/defsix.htm>. ...read more.