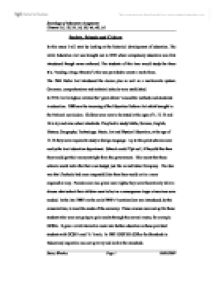 The historical development of education.

Society, Schools and Culture In this essay I will start by looking at the historical development of education. The initial Education Act was brought out in 1870 where compulsory education was first introduced though never enforced. The students of this time would study the three R's, "reading, riting, rithmetic"; this was provided to create a work force. The 1944 Butler Act introduced the eleven plus as well as a meritocratic system. Grammar, comprehensives and technical schools were established. In 1976 Jim Callaghan initiated the 'great debate' around the methods and standards in education. 1988 saw the incoming of the Education Reform Act which brought in the National curriculum. Children were now to be tested at the ages of 7, 11, 14 and 16 to try and raise school standards. They had to study Maths, Science, English, History, Geography, Technology, Music, Art and Physical Education; at the age of 11-16 they were required to study a foreign language. Up to this point schools were run by the local education department. Schools could 'Opt out'; if they did this then they would get their money straight from the government. This meant that these schools would look after their own budget just like an individual Company. The idea was that if schools had more responsibilities then they would act in a more responsible way. Parents were also given more rights; they were theoretically able to choose what school their children went to but as a consequence larger class sizes were needed. In the late 1980's to the early 1990's Vocationalism was introduced, by the conservatives, to meet the needs of the economy. These courses were set up for those students who were not going to gain results through the normal routes, for example GCSEs. It gave a valid alternative route into further education as these provided students with GCSE's and 'A' levels. In 1992 OFSTED (Office for Standards in Education) ...read more.

The second stage is called elaboration in which the teacher's views are either proved right or wrong. The third stage, called stabilisation, is no longer based on assumptions: the teacher knows the child and understands him/her. Another interactionalist approach is the exchange theory which talks about how there are rewards and penalties in our interactions with other people. We have to look not only at how a teacher interacts with pupils but also at how the pupils respond to the teacher. Now, having examined the different sociological perspectives on education, I am going to look at their similarities and differences. There are not many similarities: both Talcott Parson, who is a functionalist, and Karl Marx have a deterministic view of society. Both perspectives look at the bigger picture and the role of education within society. On the other hand there are quite a few differences. The Marxist approach is against mass education whereas the functionalist perspective is in favour of it. The Marxist perspective believes that everyone should have a chance to access the same education while the functionalist think that education is about creating the workforce and those who will not do well academically should learn a manual skill and work. The social action is the only theory looking at the individuals' relationships i.e. pupil to pupil and teacher to pupil, whereas the Marxist and the functionalists look more at the day to day school life. The social action model is against labelling whilst Marxists and the functionalists disagree: labels help the workforce. The functionalists feel that identified roles (pupil, teacher) are unmoveable whereas the social action perspective feels that these roles are more flexible. The functionalists believe that schools are a place of control the Marxist agree in part but they feel that the control is class based. The functionalists believe that schools are agencies of social control and that this has a positive effect on education. ...read more.

Examples of positions with a higher status are a company manager, doctors and judges; lower status positions may be a dustbin person or a post person. These are general judgements made by people and though they generally not personal judgements they can form the basis of stereotypes; for instance some people may think builders cannot write. Both class and status are thought to have an impact on children's education as children from middle class families are generally expected to do better in the education system because their parents know how to play the system. This may have something to do with the amount of 'cultural capital', a mixture of status, good education, power and knowledge that higher and middle class families have and working class parents might have less of. This may also be because these parents may hold similar beliefs, experiences, and common values with teachers and head teachers, almost being part of the same "high culture" which is the culture of middle class families. Parents coming from working classes may be frightened of the educational system as they may not know how to fight the education institution to get the best for their child and may have had bad experiences in education themselves. They also may not have had good schooling themselves and as a consequence this could leave them feeling left behind or even make them feel 'stupid' as their children may know more then they do. Some people believe that working class parents feel that they are being treated in a condescending and patronizing way by teachers and resent them. The 'high culture' parents are able to recognize the best schools because they will know about ofsted and how to access reports and league tables providing them with valuable information that lower class parents don't know how to or can't access. Based on all the points that I have so far examined, particularly the difficulties that the lower classes experience in accessing good education, some might say that the institution of education may be a way to keep social stratification alive. ...read more.