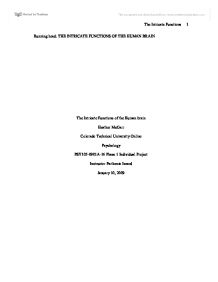 The Intricate Functions of the Human Brain

Running head: THE INTRICATE FUNCTIONS OF THE HUMAN BRAIN The Intricate Functions of the Human brain Heather McGarr Colorado Technical University Online Psychology PSY105-0901A-16 Phase 1 Individual Project Instructor Parthenia Izzard January 10, 2009 Abstract The human brain is home to all thoughts, emotions, functions, behaviors and the knowledge that comprises all our understanding. It is the control station for our body analyzing and processing all that we do. This paper will elaborate on the functions of the right and left cerebral hemispheres; as well as depth and 3 dimensional perceptions. The Intricate Functions of the Human brain Noted scientist and biochemist Doctor Isaac Asimov said that "as far as we know the human brain is the most complex and orderly arrangement of matter in the universe." Weighing a mere 3 pounds (Looy, 1990), the adult brain is made up of approximately 100 billion neurons, or brain cells (Elert, n.d.), each of which is connected to perhaps 10 thousand other neurons via nerve fibers called dendrites and axons (Looy, 1990). ...read more.

It allows for the ability of analogic thought, ocular thinking, feelings, rhythm, movement, constructive thinking and the creation of new ideas. It also enables individuals to remember people, things and events. This side of the brain is intuitive and equipped with the capability to envision the entire system of things rather than just its underlying parts (Riedl, 2002). Both sensation and perception are associated with the way in which we as humans process information; although closely related sensation and perception are very distinct from one another (AllPsych Online, 1999-2003). Sensation is the reception of information through our five senses; while perception is the way this information is interpreted (Audiblox, n.d.). Perception is the process that interprets the information gathered by our senses into information that is understandable (Foley, 2008). The ability to judge distances and perceive three-dimensional space is made possible by the brains gathering and processing of visual and mental cues. The brain dynamically chooses, collates, and assimilates information gathered from various sensory sources to construct an image of the objects or actions we observe (Coon, 1989). ...read more.

(2) Convergence. This is the ability of the eyes to turn inward. This happens when we focus on objects that are within a range of 50 feet or less. Whereas, when we look at something far away the focus of the eyes are parallel. This requires both eyes which is call a binocular cue. (3) Retinal disparity. This is a binocular cue as well. Because both eyes are spaced approximately 2.5 inches apart this enables us to obtain, to a small degree, two different views of an object thus allowing us to see 3 dimensionally when the brain combines these images (Eldora New Providence High School, n.d.). The brain is an astounding and remarkable organ. An illustration of its unique and unfathomable ability would be in the instance that if one lost or damaged an eye the brain has the ability to compensate for the loss by using different and separate avenues that would not normally be used in individuals who are able to use both eyes; thus enabling them to perceive depth and three dimensional spaces (Dennison, 2005). ...read more.