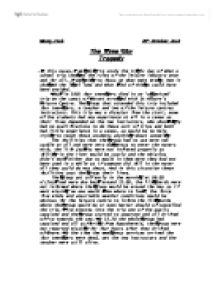 Danny Cook 20th October 2oo2 The Lyme Bay Tragedy In this essay I am going to study the tragic day of when a school trip changed the rules of the leisure industry once and for all. I am going to focus on what went wrong, how it changed the legal laws and what kind of things could have been avoided. Back in 1993 four teenagers died in an 'organised' trip on the coast of Dorset arranged with St Alburn's Leisure Centre. The group that attended this trip included four teenagers, a teacher and two of the leisure centres instructors. This trip was a disaster from the start, none of the students had any experience at all in a canoe so their lives depended on the two instructors, who shockingly had no qualifications to do these ...read more.

if went missing no one would know where to look, the force five winds and unsuitable weather conditions would be obvious for the leisure centre to inform the lifeguards where the group would be or even better should of cancelled the trip. Five minutes into the trip one of the pupils capsized and the group started to separate and all drifted off to towards the sea. By 12.20 the whole group had capsized and all suffering from hypothermia, the group were not reported missing for four hours after they drifted offshore. By the time the emergency services arrived the four teenagers were dead, yet the two instructors and the teacher were still alive. The parents made a point of what happened to their children and made sure the leisure centre would pay for their lack of safety. ...read more.

I feel the main problem that had occurred was the centre being lazy, the facilities such as whistles and lifejackets should always be checked and they should never have sent a group off into the waters with two inexperienced instructors. Also before the group set off once again facilities should have been double checked and lifeguards informed about where on the bay the group would be, what time they would set off and what time they would have arrived back to sure. Both instructors should have been medically qualified and the weather and the state of the water should also have been checked before the group set off to check if it was safe. Overall I think Peter Kite and the staff of the Leisure Centre were completely to blame for this tragedy. ...read more.