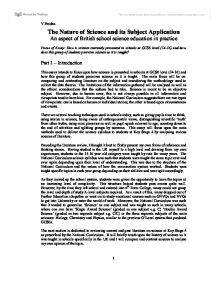 The Nature of Science and its Subject Application

The Nature of Science and its Subject Application An aspect of British school science education in practice Focus of Essay: How is science currently presented in schools at GCSE level (14-16) and how does this group of students perceive science as it is taught? Part 1 - Introduction This essay intends to focus upon how science is presented in schools at GCSE level (14-16) and how this group of students perceives science as it is taught. The main focus will be on comparing and contrasting literature on the subject and considering the methodology used to collect the data therein. The limitations of the information gathered will be analysed as well as the ethical considerations that the authors had to take. Science is meant to be an objective subject. However, due to human error, this is not always possible as all information and viewpoints tend to have bias. For example, the National Curriculum suggests there are two types of viewpoints: one is based on heroes or individual stories; the other is based upon circumstances and events. There are several teaching techniques used in schools today, such as giving pupils time to think, using stories in science, being aware of anthropocentric views, distinguishing scientific 'truth' from other truths, using mini plenaries as well as pupil-speak relevant to age, counting down to the end of activities and splitting groups by surname. This essay will focus upon the main methods used to deliver the science syllabus to students at Key Stage 4 by analysing various sources of literature. Preceding the literature review, I thought it best to firstly present my own frame of reference and thinking stance. Having studied in the UK myself to a high level and drawing from my own experiences, students in the 14-16 year old category were taught by rote for many years. The National Curriculum science syllabus was such that students were taught the same topic over and over again depending upon their level of understanding. ...read more.

All the subjects noted a drop in their grades at A-Level. However, my argument to this view would be that there is a major difference between GCSEs and A-Levels where both genders tend to struggle due to the standards expected. Moreover, the performance of students depends mostly on their behaviour as another Times article (dated 9th March 2009) on the poor performance of boys in schools depicts. This leads on to some common views Brooks et al. (2007) identified between boys and girls, which in my opinion, look like stereotypes and generalisations of students' behaviour as observed in the classroom over many years. I would disagree to believing any one of them to be the absolute truth, since for example, if girls do not perform well under pressure of timed exams, why do an increasing number of girls achieve the highest grades at GCSE? This can lead on to an argument that GCSE exams are getting easier, but that is another debate. As Eton's headmaster, Tony Little pointed out in the Times article of 22nd March 2009, the gender difference does not matter as much as the school, whether it is run well and has roughly the same proportion of boys and girls. This is quite a tall order for most schools to take in, but I believe if schools aimed for this, the science curriculum would be much easier to implement and more students would enjoy the subject. Part 4 - Summary In conclusion, this essay set out to investigate how science is currently viewed by students in schools at GCSE level (14-16) and how it is perceived by the students. Naturally, the scope of this study is too broad to undertake in one essay, thus it is not exhaustive. Further studies may include research on a national level relating to the impact of the new National Curriculum on GCSE science as well as teachers and future students. ...read more.