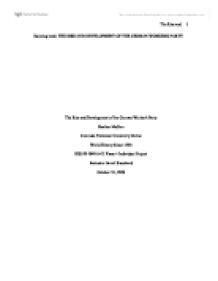 The Rise and Development of the German Workers Party

Another successful public convention took place in February of 1920; at this event Hitler himself addressed the crowd, captivating nearly two thousand individuals with his enamoring manifesto (Witherbee, 2009). On April 1, 1920, Hitler expanded on the party's name, calling it the National Socialist German Worker's Party (National Sozialischtische Deutche Arbeiter Partei, NSDAP) and as time went on the group abbreviated the name to 'Nazi,' representing the German word for nationalist. The Nazi party grew and flourished with Hitler as its spokesperson throughout the spring and summer of 1920. And to assist in keeping peace and order, Hitler initiated a faction of men to patrol the crowds during the conferences. He also adopted the Swastika symbol of good luck to signify the firm belief that the German race contained a pure and untainted blood line as far back as the Aryan empire, taking a stand against intermarriage and interracial proliferation. As well as rebuffing certain groups such as Jews, Catholics, Marxists, etc. who continually threatened the progress and overall wellbeing of their faith (Witherbee, 2009). ...read more.

By July of 1932 the Nazi party had obtained the majority of votes in the Reichstag and its president Paul von Hindenburg had no other choice but to appoint Hitler as Chancellor on January 30, 1933 (Witherbee, 2009). On February 27, 1933, the Reichstag was obliterated by arsonists. Many individuals suspected Hitler of staging the fire, but Hitler was unstoppable, he used this to his advantage and arrested all the communist governments' officials and initiated a decree allowing his Nazi army to arrest and hold prisoners without trial, restraining their right to freedom of speech. The Enabling Act of March 1933 afforded Hitler's executives absolute power over the government (Witherbee, 2009). Then on July 14, Hitler publicly announced that the Nazi party would be the only legal political party in Germany, all teenagers were forced to become members of the party, the Nazi's took control of the local government and trade unions were prohibited. The Gestapo and secret police were then formed under Hitler's authority. Hitler named himself Fuhrer of Germany and until the collapse of his German Socialist Worker's Party in 1945, he ruled with supreme power throughout Germany (History on the net, 2009). ...read more.