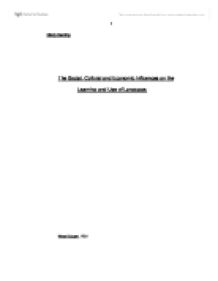 The Social, Cultural and Economic Influences on the Learning and Use of Language.

Kirsty Harding The Social, Cultural and Economic Influences on the Learning and Use of Language. Word Count: 1731 In the following work I will be examining the social, cultural and economic factors that can influence an individual's learning and use of language. I have done this mostly in reference to the learning and use of English in the UK, however on occasion I make reference to American literature where I feel that such literature also has relevance in the UK. I have approached this study in three parts, examining the social, cultural and economic factors as separate subjects, however by the end of this work it becomes apparent that these issues are inextricably inter-related and that in order to fully understand any of these issues they must be examined within the context of being but one of many factors that influence how an individual acquires and uses language. The issue of context in language acquisition and use is unavoidable. This is because language is, by it's very nature, highly contextualised. It is our primary means of expressing ourselves as individuals or members of a particular social group, and it is never acquired or used without context. Context can be provided by various factors, where we are, whom we are with or the purpose of our speech or writing. ...read more.

Whilst dialectologists may approach all dialects as linguistically equal it is apparent that not all dialects are viewed as socially equal.4 Certainly within the UK, and to a similar degree in the US, assumptions regarding a person's social class and education may be made on the basis of that person's accent and use of language. Indeed much has been written regarding prevalent social attitudes towards accent and dialect both here and in the US with much of the commentary supporting the idea of a social 'pecking order' of dialects and accents. Trudgill (Bex & Watts eds. 1999:117) Hudson (2000:2) and Metcalf (2000) all make the argument that Standard English is the variety of English most associated with 'educated' or 'professional' people and educational establishments. Trudgill (1999:121) and Jackson & Stockwell (1996:6) expand this argument by asserting that Standard English is primarily a social dialect that is spoken predominantly by those at the higher end of the social spectrum, and one which carries more prestige than other varieties of English. The same assertions are also made with regard to Received Pronunciation. Trudgill (1999:118) and Jackson & Stockwell (1996:119) identify RP as being the accent which carries the highest status and prestige in the UK and one that can be uniquely categorised as a purely social accent used by people from upper or middle class backgrounds. ...read more.

In the US this viewpoint is supported by many in the debate over Ebonics, or Black English, as a language separate from English. CNN (Dec 22, 1996) report that whilst African-American students make up only 52% of the total students in Oakland, California, they account for 71% of those on special-education courses. The argument is also made that this dialectal form of English is unsuitable for the workplace and is likely to hinder an individual in their search for employment. In conclusion, it is apparent that the influences upon the way we learn and use language are many and varied, and also that they cannot each be viewed in isolation. The issue of context and an individual's ability to use language to suit a given situation is an unavoidable aspect of discussing the social aspects of language use, and the same is true of a discussion regarding the effects of limited language skills. Furthermore, as context is often derived from social situations, and as places of education and employment are social situations it would be difficult to study the social aspects of language acquisition and use without consideration for contextual and economic factors. This inter-relatedness can make achieving a satisfactory level of understanding difficult. However such an understanding is necessary, as is the recognition that these influences also often constitute barriers, in order to successfully and effectively enable basic skills learners to improve their language and literacy skills. ...read more.