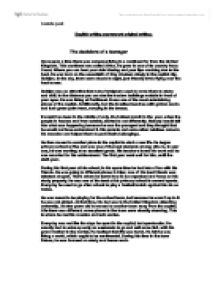 The Story of My Life:

English writing coursework original writing: The decisions of a teenager Once upon a time there was someone living in a continent far from the United Kingdom. This continent was called Africa. He grew in one of its country Ivory Coast, Where you can hear your skin hissing and your lips cracking due to the heat. He was born on the seventieth of May nineteen ninety in the capital city, Abidjan. In the sky, there were clouds in sight, just friendly birds flying over the heat waves. Abidjan was so attractive that many foreigners used to come there to study and chill. In the distance you can see the modern buildings wobble in front of your eyes. He was living at PortBouet. It was one of the most entertaining places of the capital. Additionally, had the loveliest beaches with golden sands and lush green palm trees, swaying in the breeze. It would has been in the middle of July, the hottest month in the year, when the people in houses and from outside, started to act differently. Nobody would tell him what was happening because he was the youngest and they thought that he would not have understood it. His parents and some other relatives came to his mansion and helped them to pack theirs belongings. He then moved to another place in the capital to start a new life. He begun primary school at five and was one of the best students among others, in year one, he was working at an excellent grade. ...read more.

On that day he didn't know much to say, he was only able to speak French. He was hearing plenty of nonsense around him and was lost in translation. His uncle was the father of four children now and was the first person amongst his dad family to come to the U.K. He was the one to pick me at the airport along with my dad. The sky turns from blue to dark, when the wind was blowing up suddenly at top speed. The boy didn't know where he was going; he was quiet for a while until he reached out his destination. He met his step mother and her children's, he was abashed truly ashamed and embarrassed really. As soon he entered the house, he was abstruse firstly by the greeting and was astonished by the amazing decoration. He reminded him of being in a castle full of gold and garden full of fresh fragrance. The house was extraordinary, like heaven full of compassion, beauty and love. He was like been welcome into a friendly home. Afterward he was introduced to his room; it was stunning, magnificent and reasonably warm. His room smelt like an apple mixed with strawberry flavour melting in a bowl full of different ice cream flavour. The sky was shining like the sun at the tropical of the Sahara desert at his room window. The window reflected the flowers in the back garden, the surroundings was peaceful like a grave. ...read more.

After his GCSE his first choices were to do A levels. He was a shame; he passed most subjects except the important one. He knew he could have done better. So he decides to improve his English by doing a stepping stones course. He realise that was a second chance to get back on his feet's. Bravely he decided to stop messing around. He said "you can achieve anything if you got belief and don't just believe, there is no point without hard work". His next choices were to do A levels after improved. He wanted to go to university to do a master degree. He wanted to do a career in business and engineering. These are the choices he made on the way of becoming educated. His others choices making by him, was to go work and becoming a manager. Creates his own business and make plenty of money to earn his leaving. The advantages of going to university would have earned him respect, better job, education and more money. In the other case going to work at a hourly age would have made him independent, responsible and experienced at certain things. The disadvantages are university is stress, too much authority and concern about rules. On the other side the disadvantages of him been at work at a younger age is been a miserable boss and low paid. So that's what he thought, but he decided to go for further education. To be sure, he could help people in his country and give them the opportunity to succeed like he would have. ?? ?? ?? ?? Amatcha jacob ...read more.