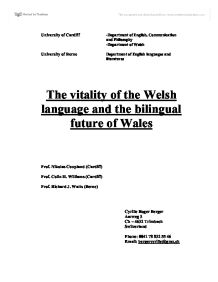 The vitality of the Welsh language and the bilingual future of Wales.

University of Cardiff -Department of English, Communication and Philosophy -Department of Welsh University of Berne Department of English languages and literatures The vitality of the Welsh language and the bilingual future of Wales Prof. Nikolas Coupland (Cardiff) Prof. Colin H. Williams (Cardiff) Prof. Richard J. Watts (Berne) Cyrille Roger Berger Aarweg 3 Ch - 4632 Trimbach Switzerland Phone: 0041 78 832 55 46 Email: bergercyrille@gmx.ch 1. INTRODUCTION 2 2. DEMOGRAPHY 4 3. STATUS 8 3.1 Economy Status 8 3.1 Language status (within / without) 12 3.2 Social- and sociohistorical status. 16 3.3 Young people and their language use 19 4. INSTITUTIONAL SUPPORT 21 4.1 Mass Media 21 4.2 Culture 23 4.3 Education 24 4.4 The role of the government: policy and planning 29 5. CONCLUSIONS 33 6. BIBLIOGRAPHY 36 7. APPENDIX 1 39 1. Introduction Welsh, one of the oldest languages in Europe and the oldest language in Great Britain, is a Celtic language descended from the Brythonic languages spoken throughout Roman Britain south of Central Scotland. In post-Roman Britain, in the face of conquests by Scandinavian and Anglo-Saxon speaking peoples, the language retreated westwards into what is nowadays known as Wales. By the Act of Union in 1536, King Henry VIII absorbed Wales into the English state, which meant that Wales came to be ruled by the English parliament and the English crown. Furthermore, the act said that English should be the only language of the courts in Wales and that the sole use of Welsh would debar one from administrative office. On the linguistic side, the translation of the Bible in Welsh in 1588 did much to standardise the language and provide a basis for the development of the language as it is spoken and written today. However, despite this standardisation, four principal dialects can still be identified today. According to "History and Status of the Welsh language" by the Welsh Language Board (http://www.bwrdd-yr-iaith.org.uk/), at the beginning of the twentieth century, Welsh was spoken by almost half of the population of Wales. ...read more.

The most important churches in terms of holding services at least some of the time in Welsh were the Presbyterian Church of Wales and the Union of Welsh Independents at 88 percent and 92 percent respectively. Around the beginning of the century and before, when about 50 percent of the population of Wales were able to speak Welsh (and presumably some more people able to understand spoken Welsh) and people would go to divine services regularly, the role of the church for the maintenance of the Welsh language was enormously important. However nowadays, most people, especially young people, do probably not go to church so often anymore. Therefore, the church can not be seen as the crucial institution where the Welsh language is living anymore. The most important factor in terms of keeping the Welsh language alive is young people and in order to reach them, other means than the medium of religion must be found. In chapter four (institutional support / mass media), we will have a closer look at Welsh-spoken institutions which are attractive for young people. Another, very important sociohistorical factor is the realisation of the language through literature. In modern day ethnology, a society is often defined as consisting of three basic components: People do not allow incest, they maintain death-rituals and they tell themselves histories about their past. As far as the last point is concerned, it is known that the Celtic tribes had had a very strong oral tradition to transmit beliefs and knowledge to the next generation. However, as the "An Introduction to Welsh literature" (www.britannia.com/wales) explains, "[we can recognize] that from evidence of surviving works by sixth century poets Taliesin and Aneirin, Welsh can claim to be the oldest attested vernacular literature in Europe." They go on by making the point that in fact, both Taliesin and Aneirin were inheritors of an old and sophisticated bardic tradition common to the Celtic people throughout Europe. ...read more.

The Board's budget is around � 6 million. In the decade from 1990 - 2000, it received �5.9 million and distributed �4.3 million of this money to other organisations in the form of grants to promote and facilitate the use of Welsh and to support the teaching of Welsh in the curriculum. In its document "Bilingual Future: A Policy Statement by the Welsh Assembly Government" (2002:4) in which the government's vision about the bilingual future of Wales, such as cited in the Introduction of this paper, was published, the government refers to the "National Action Plan for a bilingual Wales", which will be published soon and in which the measures which will be taken in order for their dream to come true are listed. Meanwhile, this plan has been published. Therefore, we will in the following analyse the key measures the government is announcing to take in order to guarantee the bilingual future of Wales. In the "National Action Plan for a bilingual Wales" (2002:9 - 53), the Assembly Government outlines its strategy, which pursues three strands. The first point is a national policy framework, whereby the Assembly Government sets the policy and provides strategic leadership to sustain and encourage the growth of the Welsh language. The second point focuses on policies and actions which promote economically and socially sustainable communities throughout Wales including those where Welsh is widely spoken within the community at large. The third point focuses on the Language and Rights of the individual. This point does not only include rights but also responsibilities of the language user. It is based on the policy by the Assembly Government which will continue to encourage the acquisition of the Welsh language by the individual on the one hand and make sure that the Welsh language can be used in all aspects of social life throughout Wales on the other hand. In the following, we will have a look at the basic ideas and strategies underlying each of these strands in turn. ...read more.