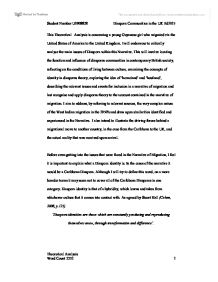 This Theoretical Analysis is concerning a young Guyanese girl who migrated via the United States of America to the United Kingdom. I will endeavour to critically analyse the main issues of Diaspora within this Narrative. This will involve locating the function and influence of diasporas communities in contemporary British society, reflecting on the conditions of living between culture, examining the concepts of identity in diasporas theory, exploring the idea of 'homeland' and 'hostland', describing the relevant issues and events for inclusion in a narrative of migration and last recognise and apply diasporas theory to the account contained in the narrative of migration. I aim to address, by referring to relevant sources, the very complex nature of the West Indian migration in the 1950's and draw upon similarities identified and experienced in the Narrative. I also intend to illustrate the driving forces behind a migrational move to another country, in the case from the Caribbean to the UK, and the actual reality that was received upon arrival. Before even getting into the issues that were faced in the Narrative of Migration, I feel it is important to explain what a Diaspora identity is. In the cases of the narrative it would be a Caribbean Diaspora. Although I will try to define this word, on a more boarder terms it may seem not to cover all of the Caribbean Diasporas in one category. ...read more.

Even though Selena's parents knew that the call for migrate workers time had past they still felt as if they would be able to get a improved standard of life than what they had received in the United States of America and in Guyana. The function and influence of Diaspora communities in contemporary British society has a lot to do with the attitudes, one from and Diaspora community brings to Britain when they arrived. As stated by Cohen (2008, p7) ' A bond of loyalty to the country of refuge/settlement competes with co-responsibility, while those who have achieved national social mobility are often reluctant to accept too close a link with a despised or low-status ethnic group abroad, even if it happens to be their own'. Looking back onto Selena's Migration from Guyana to American where she did not feel at home, to that of the United Kingdom which felt like a motherland. Many Caribbean migrants saw coming to the UK as a second home, after being colonised by the UK they also felt as if it was their 'motherland'. In many cases this was not what happened as described by Cohen (2008, p127) 'Despite finding unskilled jobs, and the early experiences of Caribbean people in the UK were often negative one. ...read more.

In-fact more often than not they would send for additional family members to partake in the 'spoils'. Selena's family and she alike, would experience a less hospitable reception at their endeavour or so they felt. I realised by my further reading that whilst an issue within Diaspora is the eventuality of returning to their 'homeland' another, 'quite paradoxically', is staying in the 'hostland'. This hostland for the next generations is by now also considered to be home. So yes, an obvious consequence of Diaspora is the 'Homeland' versus 'Hostland' scenario or more fittingly 'dilemma'. So what were the key interests, established? Well, we can talk about economic driving forces behind the emergence of Diaspora, we can also talk of social motivations such as disease and war for this dispersion, but it was very important to differentiate between 'voluntary' and 'involuntary' Diasporas as distinctly as the difference between a 'slave' and a 'freeman'. Before my wider reading I did not grasp the significance of the difference, but this is very importance because it is the measure of this that determines the degree to which one would want to return to their 'homeland' and therefore crucially this question of returning home forms the central concern to the issue of Diaspora to those of whom migrated themselves and moreover, arguably and more significantly the host land natives too. ...read more.