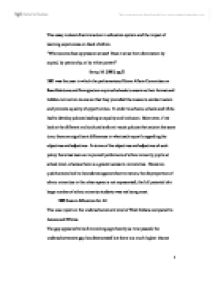 This essay is about discrimination in education system and the impact of learning experiences on black children.

This essay is about discrimination in education system and the impact of learning experiences on black children. "What source does oppression arises? Does it arise from domination by capital, by patriarchy, or by white power?" Sanip, M. (1991) pg.21 1981 was the year in which the parliamentary Home Affairs Committee on Race Relations and Immigration required schools to examine their format and hidden curriculum to ensure that they provided the means to combat racism and promote equality of opportunities. In order to achieve, schools and LEAs had to develop policies leading to equality and inclusion. More over, if we look at the different multicultural and anti-racist policies that exist at the same time, there are significant differences in what each report's regarding the objectives and adjectives. In terms of the objectives and adjectives of each policy there has been an improved performers of ethnic minority pupils at school level, whereas there is a greater access to universities. However, qualifications had no boundaries against discrimination, the disproportion of ethnic minorities in the urban space is not represented; the full potential of a large number of ethnic minority students was not being meet. ...read more.

The Dewsbury dispute Many white parents refused to send their children to the local school-Headfield where 80% of their pupils were Asians. Headfield is a Church of England school. The arguments used by the white parents in Dewsbury were similar to those used by parents back in the 1960's that Black children were "swamping" the schools. Black pupils were seen as a posing problem in terms of the numbers, their intelligence, their languages and their cultures. Black children experience racism from teachers, form other pupils and through the overt and covert curriculum. Many schools are at fault because they did not recognise the needs of the Black pupils' needs. The experience for white children of being in everyday contact with Black youngsters generates contradictory dynamics, towards racial equality and the changing effects on relationships, but also towards the existing social processes within children's cultures. White children resent schools' apparent privileging of ethnic minority cultures and as a corollary, the devaluation of their own. Many schools of contemporary Britain are motivated by the believes that if they work alongside the communities it will rise the standards of pupils' achievement; effective learning occurs when parents, families and wider community are involved; the community can ...read more.

The Ofsted report "Improving City Schools" (March 2000) shows relatively high achieving schools in poor areas often demonstrate some or all of the following characteristics: * Teaching staff will have effective techniques for dealing with more challenging pupils; * Study support activities for young people in school hours; * Strong parental involvement and support and * Active involvement of local business and community organisations. Over the past 20 years the educational system has had to adapted to the needs of their Ethnic pupils but there still remains more changes that need to apply if today's society is to represented in the correct light of the whole population and the contributions of that, Ethnic Minority people have done to shape contemporary Britain. Children today are more exposed to everyday disadvantages no matter where they live there is always something on the news, in the newspapers and through schools that shows racism still exist within the classrooms and outside. The policy can help change things for the better but they can not make change on their own, there needs to be more awareness in the classroom and outside that illustrate Ethnic Minorities do have a positive image and can have equal opportunities in achieving the same goals as their White counterparts. 1 ...read more.