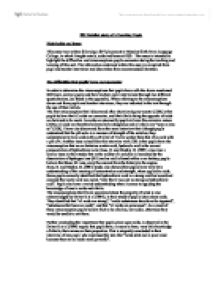 This essay was written following a SP1 placement at Moseley Sixth Form Language College, in which I taught metals, acids and bases at KS3. The essay is intended to highlight the difficulties and misconceptions pupils encounter during the teaching and lea

SS2 Detailed study of a Teaching Topic Metal acids and bases This essay was written following a SP1 placement at Moseley Sixth Form Language College, in which I taught metals, acids and bases at KS3. The essay is intended to highlight the difficulties and misconceptions pupils encounter during the teaching and learning of this unit. The information contained within this essay is compiled from pupil and teacher interviews and ideas taken from recommended literature. The difficulties that pupils' have and encounter In order to determine the misconceptions that pupils have with the above mentioned KS3 topic, several pupils and their teachers were interviewed through two different questionnaires, (as found in the appendix). When referring to the misconceptions drawn out from pupils and teacher interviews, they are indicated in the text through the use of their initials. The first misconception that I discovered after interviewing my mentor (JOR) is that pupils believe that all acids are corrosive, and that alkalis being the opposite of acids are believed to be weak. As acids are deemed by pupils to have this corrosive nature (JOR), all acids are therefore believed to be dangerous and all alkalis are "seen as less so" (JOR). I have also discovered from the same interview that although pupils understand that the pH scale is a measure of strength of the solution, they unintentionally view acids with a pH level of 1 to be weaker then that of an acid with a pH of 6. ...read more.

If they are given data from previous experiments, pupils find it hard to identify the fact that from this, they can predict other related experiments, which contain the same starting reactants. Pupils also have a problem with relating displacement reactions to the reactivity of a metal, again something, which is based upon predicting the reactivity of reactants. Balancing word equations also seems a problem for pupils (JOR). It is not understood that for a word equation to be correctly written that both the reactants and the products must be equal on both sides. Teaching and learning activities to address these difficulties The following paragraphs identify key learning and teaching activities, which have been suggested by the teachers interviewed, to address the difficulties that pupils have with the metal, acid and bases topic. To address the issue that pupils have with the naming of salts formed during neutralisation reactions, by always identifying the salt as NaCl (KIP). Teacher activities could include the idea of salt cards and ask pupils to decide and select an appropriate metal or metal compound, which they believe, could form the salt. Pupils gain practice in distinguishing salts from different compounds, one possible activity to address this issue suggested by KIP, is to perform experiments upon the salts produced by the reactions. ...read more.

This knowledge should allow pupils to identify that some metals would react faster than others. Without this prior understanding it is again a large jump from one unit to another, this prior knowledge allows pupils to gather information on reactivity series of metals, whilst observing the reactions of acids. Pupils are also gaining insight into how metals react, without questioning the reasons for such experiments. This therefore allows a swift transition from one unit to another without confusing pupils. From the observations of the reactivity of metals with acids, pupils should be encouraged to identify that this data can be used to predict other reactions, such as the reactions with oxygen and water. To further consolidate this information pupils should now be encouraged to investigate this through Sc1 investigations such as the trip to Venus, which reinforces their understanding of the reactivity series. Understanding of the reactivity series of metals is a prerequisite of the next unit within this topic. Without the knowledge of the prior reactions and construction of word equations, pupils will not understand the principle of displacement. To understand this part of the topic pupils must has secure knowledge that the most reactive metal kicks out the weakest metal. It is therefore very important that this is the last unit within the topic as it consolidates the rest of the topic and pupil understanding is at a premium. ...read more.