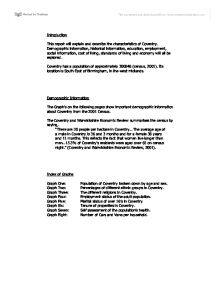 This report will explain and describe the characteristics of Coventry.

Introduction This report will explain and describe the characteristics of Coventry. Demographic information, historical information, education, employment, social information, cost of living, standards of living and economy will all be explored. Coventry has a population of approximately 300848 (census, 2001). Its location is South East of Birmingham, in the west midlands. Demographic Information The Graph's on the following pages show important demographic information about Coventry from the 2001 Census. The Coventry and Warwickshire Economic Review summarises the census by saying, "There are 30 people per hectare in Coventry... The average age of a male in Coventry is 36 and 3 months and for a female 38 years and 11 months. This reflects the fact that women live longer than men...15.3% of Coventry's residents were aged over 65 on census night." (Coventry and Warwickshire Economic Review, 2001). Index of Graphs Graph One: Population of Coventry broken down by age and sex. Graph Two: Percentages of different ethnic groups in Coventry. Graph Three: The different religions in Coventry. Graph Four: Employment status of the adult population. Graph Five: Marital status of over 16's in Coventry Graph Six: Tenure of properties in Coventry. ...read more.

Tom seems to date from the first painting of the ride." (Brooks, 2000, pg 5) The cathedral quarter is also well known. Coventry's cathedral was bombed in the second world war and the outer shell still stands as well as a new cathedral which draws on forgiveness and reconciliation. Coventry has three spires in the city centre, St Michaels, Holy Trinity, and Christ church. Today Coventry has drawn on this for a recent image change that claims, "Coventry Inspires". Education Coventry's education has been praised for its continually improving standards. "In 2001, schools continued to do very well - at GCSE/GNVQ our rate of improvement was twice the rate of the national." (Coventry Evening Telegraph, 22nd November 2001, pg 12). This will hopefully continue to be the case as pre-GCSE students are shown in recent statistics to be doing better. "Compared to the 10 statistical neighbours Coventry is first in English, second in science, third in maths and second overall" (Wilson, L., 20th August 2003, pg17). Despite this, the city is below national average, but is constantly improving. ...read more.