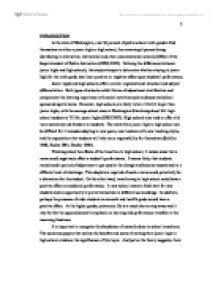 This study attempts to determine whether staying in junior high for the ninth grade year has a positive or negative effect upon students' performance.

INTRODUCTION In the state of Washington, over 94 percent of public school ninth graders find themselves in either a junior high or high school, the remaining 6 percent being distributing in alternative, institutional and other unconventional schools (Office of the Superintendent of Public Instruction (OPSI) 2003). Noticing the differences between junior highs and high schools, this study attempts to determine whether staying in junior high for the ninth grade year has a positive or negative effect upon students' performance. Junior highs and high schools offer a similar organizational structure and subject differentiation. Both types of schools exhibit forms of educational stratification and complement the learning experience with social activities such as dances and school sponsored sports teams. However, high schools are likely to be a little bit larger than junior highs, with the average school sizes in Washington State being about 941 high school students to 751 for junior highs (OPSI 2003). High schools also tend to offer a bit more autonomy and freedom to students. The move from junior high to high school can be difficult for it includes adapting to new peers, new teachers with new teaching styles, and the expectation that students will take more responsibility for themselves (Schiller 1999, Eccles 1991, Dauber 1996). Thinking about the effects of the transition to high school, it makes sense that a move could negatively affect a student's performance. It seems likely that students would need a period of adjustment to get used to the change and become accustomed to a different level of challenge. The adaptation required of such a move could potentially be a distraction for the student. On the other hand, transitioning to high school could have a positive effect on academic performance. A new school means a fresh start for new students and an opportunity to prove themselves in different surroundings. In addition, perhaps the presence of older students in eleventh and twelfth grade would have a positive effect. ...read more.

The omitted variable in this case is the junior high variable. Hence, the coefficient on each of these is interpreted as the respective impact of not being in junior high for ninth grade. is the variable of interest, as the coefficient of such will predict the impact of being in high school relative to junior high. The significance and direction of the coefficient on will indicate whether students in high school perform relatively better or worse than do students in junior high. In addition to what type of school a student is in, this paper employs a large body of other data relevant to student test scores. So matrix X also includes an array of variables accounting for characteristics ranging from computer use to parental help with homework and ethnicity. District enrollment is also included to control for the possibility that junior highs occur in large communities. But as has been suggested by numerous researchers, what is true for the majority is not necessarily true for all. Along with many others, Kathryn Schiller and David Kinney showed that the effects of such a transition are not universal among students (Schiller 1999, Kinney 1993). Even if Ninth graders in general perform better in junior highs, there could still be students who perform better in high school. Determining a direction on the coefficient for high school, the next step is to sort out which groups of students are affected more or less by such a transition. In total there are two regressions, the first aimed at whether junior high or high school is better for ninth graders in general, the second at what type of student does better in each setting. Interactive dummy variables combine student characteristics with school type and allow the ability to discern which groups of students, if any, respond more or less to being in a high school versus junior high environment. ...read more.

There is the possibility, however that the extra year in the junior high is beneficial to students in general. Indeed, if scores can be raised as a result of keeping students out of high school their freshman year by more than one twentieth of a standard deviation, it is an option to be explored. Perhaps some 13-14 year olds are not yet ready for the high school environment, and keeping them out of it would be helpful. Continued student performance based on whether they were in a junior high for 9th grade is beyond the scope of this study, but is interesting in its policy implications. If in fact it were better for some students to stay in junior high during ninth grade, it would make sense to abolish four year high schools, instead moving seventh, eighth, and ninth graders into the junior high environment and keeping the tenth, eleventh, and twelfth grades as part of the high school experience. And with bilingual students in high school performing relatively better than their counterparts in junior high, it may be better to move some groups of students on to high school, with other groups remaining in junior high. This would be a complicated procedure though, and only justified through continued performance evaluations to the ninth graders tested in this analysis to determine if in fact the negative effects of being in high school are a result of it being a high school, or a result of the recent transition. The development of future performance models lies outside the range of this data, but would need to be devised to explain whether ninth grade school type plays any role in student performance. 1 Daniel Levine and Eugene Eubanks found that their African American and Hispanic groups performed about a half a standard deviation below the scores for the White groups, this is consistent with findings using the ITED (Levine 1990). 2 High schools have about a 2% concentration of bilingual students, while junior highs have about a 1% concentration 2 ...read more.