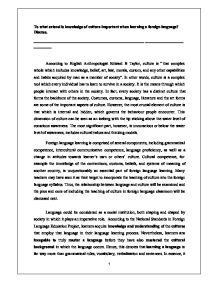 To what extend is knowledge of culture important when learning a foreign language? Discuss.

Therefore, foreign language learners should have the knowledge of culture so that they will be aware of culturally appropriate ways to address people, make requests, agree or disagree and express gratitude, especially since their own customary behaviour and intonation may be perceived in a dissimilar way by members of different cultures. It is important to comprehend that so as to become an excellent communicator; the language spoken must be equivalent to culturally appropriate behaviour. Through the learning of culture in foreign language classroom, learners will be aided in taking an insider's sight of the undertones of others' thoughts and words. In other words, learners could doubt their own assumptions and try to discover the underlying magnitude of certain terms or words in their target language and culture. For instance, in English culture, both animals and humans have feelings, get sick, and are buried in cemeteries. Nonetheless, in Hispanic culture, the difference between humans and animals is vast. As a result, bullfighting is greatly improbable to be considered as a waste of time, as many western spectators are apt to say. In this context, notions such as "cruel," "slaughter," or "being defenceless" convey enormously diverse connotations in both cultures (Lado, 1986). Consequently, through exposure to the foreign civilisation, learners certainly will draw some comparisons between their home and target culture. ...read more.

In fact, the learners purely want to master the language and they will not involve themselves into that community which uses the language. For this reason, in the learners' point of view, it could be meaningless for them to discover about the culture of the society or nation. In my viewpoint, although the main goal of foreign language instruction is facilitating foreign language awareness and acquisition, I agree that it is important that cultural teaching should also be included in the curriculum of foreign language learning. In point of fact, the incorporating of culture into the syllabus could heighten learners' cross-cultural awareness as well as understanding and learners could be encouraged to think slightly further. In this case, learners will not lose sight of the fact that not all members of the target community think and behave in the identical way since their judgments are enriched and they have been given far deeper meaning of "intercultural communicative competence". Indeed, materials treated in foreign language classes could also help to develop knowledge, and learners are encouraged to relate the knowledge they have learnt to knowledge of their own culture. In addition, learners could put the new knowledge into practice in real situations if there is a need. ...read more.