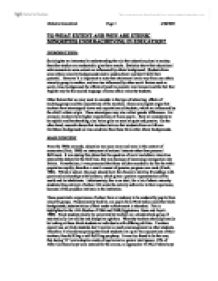 To what extent and why are ethnic minorities underachieving in education?

TO WHAT EXTENT AND WHY ARE ETHNIC MINORITIES UNDERACHIEVING IN EDUCATION? INTRODUCTION: Sociologists are interested in understanding the role that education plays in society, therefore studies are conducted to give them results. Statistics show that educational achievements to some extent are influenced by ethnic background. Students from some ethnic minority backgrounds tend to underachieve and don't fulfil their potential. However it is important to note that attainment levels vary from one ethnic minority group to another, and are also influenced by other social factors such as social class, background, the effects of positive parental involvement and the fact that English may be the second language of some ethnic minority students. Other factors that we may want to consider is the type of schooling, effects of teaching groups and the expectations of the teachers. Some sociologists argue that teachers have stereotyped views and expectations of students, which are influenced by the child's ethnic origin. These stereotypes may also reflect gender differences. For example, teachers have higher expectations of Asian pupils - they are considered to be capable and hardworking, also Asian girls are seen as quiet and passive. ...read more.

* Numerous studies use categories to classify ethnic groups that are too general, e.g. the term 'Asian' does not allow us to see the differences in achievement levels between Indian, Pakistani and Bangladeshi students. * On the whole the statistics produced do not allow us to observe the potential influence of social class background. CONCLUSION: The 1944 Education Act is aimed to give equality of educational opportunity for all children, regardless of their ethnic background. However despite these efforts, sociological evidence has made it clear that not all children of the same ability achieve the same success in education, and inequalities in education remain. We live in a multicultural society in Britain; therefore our education system should reflect this regardless of ethnicity. In an ideal world we should consider teaching in such a way that subjects should become less ethnocentric (biased towards a particular society and culture) and become more multicultural based with regards to subjects such as history, language and religion. At the moment the education system tends to be ethnocentric, which may contribute to low self-esteem in the ethnic minority students. If we are going to have multi-cultural students, then we also need to have a balance in place, with multicultural teachers too. ...read more.