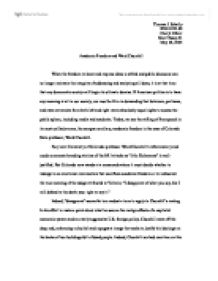 Today, we see the stifling of free speech in its most unlikely arena, the campus corollary, academic freedom in the case of Colorado State professor, Ward Churchill. Fury over University of Colorado professor Ward Churchill's inflammatory

Academic Freedom and Ward Churchill When the freedom to share and express ideas is stifled and public discourse can no longer maintain the integrity of addressing and analyzing all ideas; it is at that time that any democratic society will begin its ultimate demise. If American politics is to have any meaning at all in our society, we must be firm in demanding that believers, partisans, and even extremists from both left and right retain absolutely equal rights to access the public sphere, including media and academia. Today, we see the stifling of free speech in its most unlikely arena, the campus corollary, academic freedom in the case of Colorado State professor, Ward Churchill. Fury over University of Colorado professor Ward Churchill's inflammatory and crude comments branding victims of the 9/11 attacks as "little Eichmanns" is well-justified. But Colorado now stands at a crossroads where it must decide whether to indulge in an emotional overreaction that sacrifices academic freedom or ...read more.

To be clear, we should reject Churchill's statements at every level of argumentation. His analysis of economic systems is shallow and imbued with ideological presumption. His anti-Americanism is palpable and his standards of judgment in evaluating policy actions around the world are inconsistent. His tone is offensive and anti-social. One might even fairly call him a demagogue. That said, Churchill must not be fired. To fire Churchill from his position at a state-run university based on our justified revulsion of his political views would make a mockery of principles of academic freedom that go far beyond this one loopy professor. It would represent a full-scale embrace of state censorship that would ultimately damage a lot of people who are completely innocent of Churchill's vulgarism and are indeed the very people who are most offended by Churchill's views. In 2003, Colorado led the nation in addressing the issue of academic freedom, by endorsing the "Academic Bill of Rights" sponsored by the Students for Academic Freedom (SAF) ...read more.

to the majority, provided," surely in Richard Nixon can embrace the idea of preserving the purity of political discourse, even offensive rhetoric, then the academic institution of Colorado State founded on the exchange of ideas can also. If it is wrong for a leftist majority among campus professors and administrators to enact speech codes that punish conservative students and professors, then it is also wrong for our centrist-conservative political majority to impose a speech code by firing Ward Churchill. If Churchill is fired for his political dissent, that will destroy the principle that protects conservatives for being targeted for their political dissent. The Colorado legislature recently passed a strongly-worded condemnation of Churchill's comments and that's the way it is supposed to work - bad arguments should be answered with good arguments. Attempts to punish people who make bad arguments only rebound against us all. ?? ?? ?? ?? Thomas J. Schally ENG 1021.90 Cheryl Gferer Short Essay #1 May 18, 2005 ...read more.