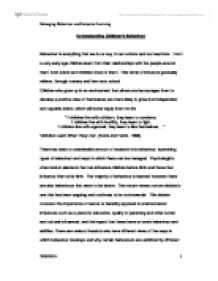 Understanding Children's Behaviour Behaviour is everything that we do or say, in our actions and our reactions. From a very early age children learn from their relationships with the people around them, both adults and children close to them. This circle of influence gradually widens, through nursery and then onto school. Children who grow up in an environment that allows and encourages them to develop a positive view of themselves are more likely to grow into independent and capable adults, which will better equip them for life. "If children live with criticism, they learn to condemn, If children live with hostility, they learn to fight, If children live with approval, they learn to like themselves...." 'Children Learn What They Live', (Nolte and Harris, 1998). There has been a considerable amount of research into behaviour, examining types of behaviour and ways in which these can be managed. Psychologists often look at elements that can influence children before birth and those that influence them after birth. The majority of behaviour is learned; however there are also behaviours that seem to be innate. The nature verses nurture debate is one that has been ongoing and continues to be controversial. This debate concerns the importance of nature or heredity opposed to environmental influences such as a person's education, quality of parenting and other social and cultural influences, and the impact that these have on one's behaviour and abilities. There are various theorists who have different views of the ways in which behaviour develops and why certain behaviours are exhibited by different people and at different stages of life. However, there seems to be a general consensus that nature and nurture are both contributors to behaviour. Another area that psychologists agree on is that theories are mapped in relation to age, or stages of development. It appears that social theories are most common in children from the ages of birth to four years; cognitive theories are most common to children aged five to ten years, closely followed by ...read more.

Assessment of Special Educational Needs and gives practical advice to LEA, maintained schools and others concerning their statutory duties to identify, assess and provide for children's special educational needs." The Every Child Matters agenda states that teachers will have access to SEN specialists to support and deliver a personalised programme of learning for pupils with SEN. This is supposedly the task of the school's inclusion co-ordinator (INCO) and the special educational needs co-ordinator (SENCO) to bring such a team together. However, I have my reservations about this. Where will the funding come from to pay for these paraprofessionals? Most schools struggle to access enough resources for SEN pupils, such as SENSS support, is the government going to issue additional funding? Every Child Matters also says that teachers and early years practitioners will be able to spend less time on SEN paperwork and more time on supporting early intervention and identification, but all paperwork and records still need keeping up to date, so who draws the short straw? In the setting where I work whenever a problem with a child's behaviour arises the member of staff that deals with it has to write up the incident in a behaviour log (see appendix i). All staff follow this practice and all staff deal with behaviour incidents in the same way. This is done through our assertive approach to discipline and through constant communication with one another and our shared expectations of the children's behaviour. As our environment is fairly unique because we are such a small community we are able to keep track of all the children's conduct and deal with any problems promptly. All members of staff have very high expectations of the children and will not except anything less. The children are aware of this and I think that this encourages higher standards from the children. "Teachers have expectations of what a class of pupils will achieve....Where teachers make them explicit they provide pupils with clear guidance on the standards of behaviour and work which they can rise to....... ...read more.

"Use Praise and positive reinforcement to encourage the child, as he will have to use twice as much effort to complete physical tasks". P. Mukherji (2001 page 194). It is hard to determine whether or not M has a behavioural problem or whether this could be due to his background and his home environment. Rutter (1992) believes that a person's learning is about 60% nature and 40% nurture. M may be suffering effects from his early childhood environment. J. Bowlby thought that the theory of attachment was very important to a child's development. He believed that the relationship between the baby and his/her mother figure was the most important. He believed that a baby needs one central person to be the mother figure. It is possible that M was not able to form an attachment to his mother during the early stages of his life because of the circumstances that were present such as being cared for by a number of different adults. Also it could have been the case that his mother found it hard to bond with M because of the circumstances of his conception. However, according to H. Ayers and C. Prytys (2002, page 27): "-insecure attachments can become secure in later life due to the development of close emotional relationships with carers, friends and partners". Now M has a more settled home life (even though it is not ideal), with more routine to his day and more consistency in the people that care for him, it could be that his insecure attachments become secure ones. The environment that M has been subjected to could have influenced his behaviour and his attitude as to what is acceptable behaviour. His early home environment when living with Grandma would not have been ideal. As I have previously mentioned, various theorists such as Maslow, Pavlov and Skinner all believe that a child's environment and experiences have an impact on how a child behaves and conducts themselves. It is these environments and experiences, whether positive or otherwise, that mould and shape people. ...read more.