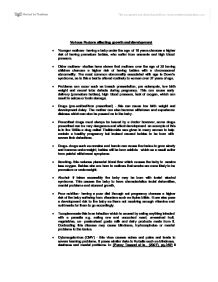 Various Factors affecting growth and development * Younger mothers- having a baby under the age of 16 years chances a higher risk of having premature babies, who suffer from anaemia and high blood pressure. * Older mothers- studies have shown that mothers over the age of 35 having children chances a higher risk of having babies with a chromosomal abnormality. The most common abnormality associated with age is Down's syndrome, as to this a test is offered routinely to women over 37 years of age. * Problems can occur such as breech presentation, pre eclampsia, low birth weight and neural tube defects during pregnancy. This can cause early delivery (premature babies), high blood pressure, lack of oxygen, which can result in seizes or brain damage. * Drugs (pre-scribed/Non prescribed) - this can cause low birth weight and development delay. The mother can also become withdrawn and experience distress which can also be passed on to the baby. * Prescribed drugs must always be issued by a doctor however, some drugs prescribed can be very dangerous and effect development an example of this is in ...read more.

eating raw and uncooked meat, unwashed fruit, vegetables, un- pasteurised goats milk and dairy products made from it. Contracting this disease may cause blindness, hydrocephalus or mental problems to the foetus. * Cytomegalovirus (CMV) - this virus causes aches and pains and leads to severe learning problems. It poses similar risks to Rubella such as blindness, deafness and mental problems. In (Penny Tassoni et la., (2007), pg.352) it says "it is thought to infect as many as 1% of unborn babies and of those infected about 10per cent may suffer permanent damage. * Listeriosis- This is caused by pathogens found in soil, vegetation, food and water. This can cause premature labour, which may mean that they babies body may not yet be fully developed to the normal stage. * HIV- This can be passed onto the foetus, allowing a higher risk for babies to be born HIV positive. This makes the babies immune system very weak and chances a higher risk of sickness. * Syphilis- This is a sexually transmitted disease and is only able to pass along the placenta after the 20th week of pregnancy. ...read more.

a child who's suffers from Down syndrome may find some difficulties in performing certain task, so they may need to require assistance in order to move to the next level. * Environment- this can be negative if the mother is in an unhealthy environment e.g. breathing in too much pollution or smoking from the air can be toxic and passed on tot the baby. * Not enough income- Not enough income can mean the mother may not be able to afford the right healthy foods, so nutrients won't be given to the baby. Not eating the right healthy foods can lead to obesity, heart problems and stroke. Being worried about having enough money can cause stress, allowing the chances of a bay to be miscarried or delivered early. It could also be that certain items may not be in the house, this could lead to illness e.g. not having a heating on during the winter. * Overcrowded housing means they might not be enough space for stimulation. It may also lead to stress as they may not have enough privacy and time to themselves. ...read more.