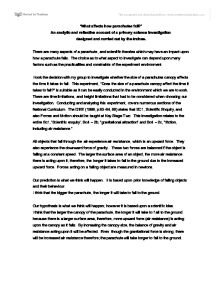 What affects how parachutes fall?

'What affects how parachutes fall?' An analytic and reflective account of a primary science investigation designed and carried out by the trainee. There are many aspects of a parachute, and scientific theories which may have an impact upon how a parachute falls. The choice as to what aspect to investigate can depend upon many factors such as the practicalities and constraints of the experiment environment. I took the decision with my group to investigate whether the size of a parachutes canopy affects the time it takes to fall. This experiment, "Does the size of a parachute canopy affect the time it takes to fall?" is suitable as it can be easily conducted in the environment which we are to work. There are time limitations, and height limitations that had to be considered when choosing our investigation. Conducting and analysing this experiment, covers numerous sections of the National Curriculum. The DfEE (1999, p.83-84, 88) states that SC1, Scientific Enquiry, and also Forces and Motion should be taught at Key Stage Two. This investigation relates to the entire Sc1, 'Scientific enquiry', Sc4 - 2b, "gravitational attraction" and Sc4 - 2c, "friction, including air resistance." All objects that fall through the air experience air resistance, which is an upward force. ...read more.

* the centre of the parachute always put into the parachute droppers clip, this ensures that it is the same point on the canopy that is always at the highest point at the time of release, Photographs of the experiment location, and the parachutes constructed and used in the experiment can be found in Appendix One. "The control variables constitutes a fair test." (Peacock, 1999, p.12) To ensure the investigation is controlled, the only variable that changes is the independent variable, all others are controlled. This should result with it only being the independent variable that affects the dependent variable. As stated by Goldsworthy & Feasey (1997, p.24), "taking care to ensure as fair a test as possible will give you more confidence in your results." To get accurate and reliable results, we decided to conduct the experiment ten times for each parachute. Peacock, (1999, p.13) suggests that this should be done to ensure the final result is more accurate, so that you can identify any 'fluke' results, and so that anomalous measurements can be identified by looking at the trend. The measurement was measured in seconds using a digital stop clock. We initially began the experiment with a larger metal clip, however we found that the parachute was falling too fast for us to measure time accurately. ...read more.

* The weight could be improved; an actual weight would have been more suitable than a metal clip. Also the suspension lines may not have been exactly in the centre of the clip, causing the parachute to be off-centred. * The larger parachute would have had a greater total weight due to more plastic used in construction; this should have been minimal due to the materials used. Extension investigations could be carried out with canopies of even more sizes, to perhaps see if there is an optimum size of canopy? Different variables such as the materials used and shapes could also be investigated. Some of the variables are particularly difficult to control, such as a draft in the room may result in the parachute taking longer to fall, hence results would be lacking reliability. There are methods as explained above to try and combat this issue. The combined total weight of each parachute also could have an impact upon the results. During the experiment this was not considered, this highlights the importance of thorough planning in science investigations and supports the idea of carrying out pilot test before conducting the final experiment. Science is however a subject whereby there are always alternative avenues to explore, which mean to conduct an experiment that is one hundred percent reliable, is virtually impossible. All that can be done is the identification of all of the variables and all reasonable steps taken to keep the control variables constant. ...read more.