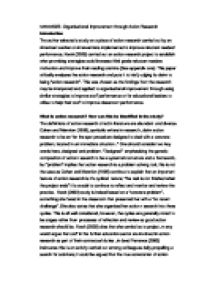 What is action research? How can this be identified in the study?

MEDD4022- Organisational Improvement through Action Research Introduction The author selected a study on a piece of action research carried out by an American teacher on interventions implemented to improve reluctant readers' performance, Kwok (2009) carried out an action research project to establish what promising strategies could increase third grade reluctant readers motivation and improve their reading stamina (See appendix one). This paper critically analyses the action research and puts it to trial judging its claim to being "action research". This was chosen as the findings from the research may be interpreted and applied to organisational improvement through using similar strategies to improve staff performance or for educational leaders to utilise to help their staff to improve classroom performance. What is action research? How can this be identified in the study? The definitions of action research cited in literature are abundant and diverse. Cohen and Mannion (1998), symbolic writers in research, claim action research to be an "on the spot procedure designed to deal with a concrete problem, located in an immediate situation.." One should consider two key words here, designed and problem. "Designed" emphasising the genetic composition of action research to be a systematic structure and a framework, but "problem" implies that action research is a problem solving tool, this is not the case as Cohen and Mannion (1998) continue to explain that an important feature of action research is it's cyclical nature; "the task is not finished when the project ends" it is crucial to continue to reflect and monitor and review the practice. ...read more.

Elliott (2000) would deem Kwok (2009) research to be that of action research, "a study of a social situation with a view to improving the quality of action within it." This could be interpreted to mean that unless change happens, one cannot be seem to be undertaking action research. The author in particular critiques the data collection phase of Kwok (2009) study, she does not directly involve participants but rather draws her own observations, and she study is very practitioner focused. Brown and Dowling (1998) state the very ethos of action research discourages taking important decisions other than by direct to the participants. This begins to hold Kwok (2009) study of "action research" under scrutiny. The author offers the idea that Kwok (2009) could be considered continuing professional development rather than action research. After surfing the literature, there appears to be a thin line between improving own practice by generic and every day methods and what constitutes action research. What would appear to differentiate the two is the means by which the research/improvement has been carried out. Has the research followed a model? There are several models that can be followed when undertaking action research, the earliest formation from Lewin (1930). He formed an action research cycle of planning, acting, observing and reflecting. A rather simplistic model; the issue being that once one has reflected, there maybe a need to revisit and adjust the direction or process that is being utilised in the research. ...read more.

This would work well used to make organisational improvement or to base leadership changes upon as the reflection gives time for democratic discussion and involvements, hence making the employees more subjective to change. Regardless of its critics, action research is evidently effective as a methodology. Kwok (2009) sustained improvement within the classroom, and with it's cyclical nature, improvement is continuously monitored, so any invasions to the change would be quickly identified and rectified, therefore improvement is continuous and sustained. In contrasting paradigms such as positivist and interpretive approaches, there is a definite linear holt to the process. For example, in medicine, research may be carried out on the effects of aspirin in curing headaches. A positivist approach would direct the research around quantitative data, maybe identifying the participants whose headaches were cured by the drug. An interpretive approach may focus on how well they were cured and how taking the drug affected each individual. Both approaches would end with qualitative or quantitative data evaluation, if action research was used as an approach, it may direct the focus on evaluating how effective the drug was, it may investigate what else could be used, either way it would continue until the headaches were cured. The traditional paradigms are associated with concluding the study as apposed to continual monitoring the issue or chance and taking the reins to sustain the improvement or change. This would clearly flag the action research paradigm as the ideal to follow for organisational improvement or leadership development upon which to base practice. ...read more.