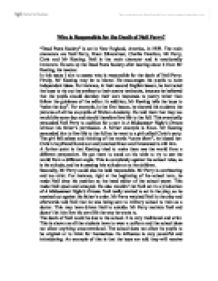 Who is Responsible for the Death of Neil Perry?

Who is Responsible for the Death of Neil Perry? "Dead Poets Society" is set in New England, America, in 1959. The main characters are Neil Perry, Knox Silverstreet, Charlie Dawlton, Mr Perry, Chris and Mr Keating. Neil is the main character and is emotionally immature. He sets up the Dead Poets Society after hearing about it from Mr Keating, his teacher. In this essay I aim to assess who is responsible for the death of Neil Perry. Firstly, Mr Keating may be to blame. He encourages his pupils to have independent ideas. For instance, in their second English lesson, he instructed the boys to rip out the preface to their poetry textbooks, because he believed that the pupils should develop their own responses to poetry rather than follow the guidance of the editor. In addition, Mr Keating tells the boys to "seize the day". ...read more.

This is completely against the school rules, as is his attitude, and he is passing this attitude on to the children. Secondly, Mr Perry could also be held responsible. Mr Perry is overbearing and too strict. For instance, right at the beginning of the school term, he made Neil drop his position as the head editor of the school paper. This made Neil upset and annoyed. He also wouldn't let Neil act in a production of A Midsummer Night's Dream. Neil really wanted to act in the play, so he sneaked out against his father's order. Mr Perry watched Neil in the play and afterwards told Neil that he was being sent to military school to train as a doctor. This may have driven Neil to suicide. ...read more.

This is against the school rules. They are too immature to handle their independence and use it without thinking of the consequences. Neil could be responsible for his death as he is immature for his age and doesn't take life seriously enough. He also must take some responsibility, as it was him who pulled the trigger. In conclusion, I would say that the main cause of Neil Perry's death was his father, Mr Perry. Mr Keating may have told him to live his life on the edge and seize the day, but Neil liked it that way. He was a really good actor and could have done well in acting as a career, yet Mr Perry still wouldn't let Neil do it. Then, after the play, Mr Perry told Neil off; this was on the night of his death and probably drove Neil to suicide. ...read more.