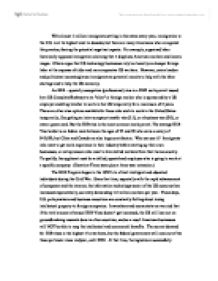 With almost 1 million immigrants settling in the states every year, immigration to the U.S. is at its highest level in decades, but there are many Americans who are against this practice, fearing the potential negative impacts.

With almost 1 million immigrants settling in the states every year, immigration to the U.S. is at its highest level in decades, but there are many Americans who are against this practice, fearing the potential negative impacts. For example, organized labor historically opposed immigration claiming that it displaces American workers and lowers wages. Others argue that US technology businesses rely too heavily on cheaper foreign labor at the expense of older and more expensive US workers. However, union leaders and politicians increasingly see immigrants as potential recruits to help with the labor shortage and to help the US economy. An H1B - specialty occupation (professional) visa is a $500 work permit issued by a US Consulate/Embassy to an "alien" or foreign worker who is sponsored by a US employer enabling him/her to work in the US temporarily for a maximum of 6 years. There are other visa options available for those who wish to work in the United States temporarily, like getting an intra-company transfer visa (L1), or a business visa (B1), or even a green card. But the H1B visa is the most common work permit. The average H1B Visa holder is an Indian male between the ages of 25 and 29 who earns a salary of $45,000, but China and Canada are also large contributors. Who can use it? ...read more.

MANDATORY BUDGET AUTHORITY - Dollars in Millions - 2001 2002 H-1B Petition $500.00 $1000.00 Petition for Non-immigrant Worker (Form I-129) $130.00 $130.00 Academic Evaluation $75.00 $75.00 INS Premium Processing Service $1000.00 $1000.00 Legal Fee (upon seeking legal services) $800 avg $800 avg TOTAL 2505 3005 On October 10, 2000, Congress passed H.R. 5362 which increased the amount of the fee charged to employers who are petitioners for the employment of H-1B workers. The fees were increased from $500.00 to $1,000.00. The fee remains in effect for H-1B petitions filed before October 1, 2003. However, certain employers are exempt from the $1,000.00 fee. According to INS, these employers constitute the following: "any organization that is a primary or secondary education institution, an institution of higher education, a non-profit entity related to or affiliated with any such institution, a non-profit entity which engages in established curriculum-related clinical training of students registered at any such institution, a non profit research organization or a governmental research organization." In addition, the INS requires that all applicants pay a fee of $130 for Form I-129. "Petition for Non-immigrant Worker" (Form I-129) is used as a tool to gather information on the industry of the petitioning employer, and the named H-1B worker's highest level of education, compensation, and country of origin. Therefore, INS fee is either $1,130 or $130, depending on whether or not the organization is for-profit ($1,130) or not for profit ($130) as described above. ...read more.

The children of immigrants, although bilingual, prefer English to their native tongue at astounding rates. Immigrants and refugees intermarry outside their group at a rate of 1 in 3. The rate is even higher, 1 out of 2, for their children. Finally, Americans believe immigrants contribute little to our society. Besides their significant economic contributions, immigrants continually have helped shape and mold the fabric of our society. Immigrants, for the most part, are firm believers in family unity. They are more likely than natives to live in families: 76 percent vs. 70 percent. They also tend to have more children: 2.25 vs 1.93. Immigrants are more likely to be married: 60 percent vs. 55 percent. Only 8 percent of immigrants are divorced or separated compared to 11 percent of natives. Immigrants recognize the value of an education. While many lack a high school education, they are just as likely as natives to hold a college degree: 20 percent. That rate rose during the 1980s: Among those admitted in 1987-1990, 29 percent held a college degree. Immigrants are also twice as likely as natives to hold Ph.D.'s. Immigrants respect the law as much, if not more, than native born Americans. They are less likely than natives to be confined to a state prison. Nearly three-fourths of all new immigrants intend to reside in six states: California, New York, Texas, Florida, New Jersey, and Illinois. Among these states --only New York has a greater share of immigrants in its prisons than in its general population. ...read more.