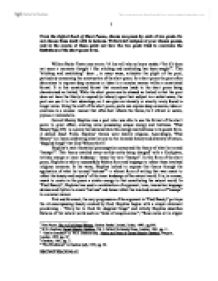 From the Oxford Book of Short Poems, choose one poem by each of two poets. Do not choose those dealt with in lectures. Write brief analyses of your chosen poems, and in the course of these point out how the two poets tried to overcome the limitations of the short poem form. William Butler Yeats once wrote: "A line will take us hours maybe / Yet if it does not seem a moments thought / Our stitching and unstitching has been naught"1. This "stitching and unstitching" does , in many ways, articulate the plight of the poet, particularly concerning the construction of the short poem. In a short poem the poet often determines to express deep concerns or ideas in a concise manner within a constricted format. It is this constricted format that sometimes leads to the short poem being characterised as limited. While the short poem can be classed as limited in that the poet does not have the liberty to expand (or labour) upon their subject in a verbal sense, the poet can use it to their advantage, as it can give an intensity or alacrity rarely found in longer verse. ...read more.

Namely through using the devices of argument, tone, alliteration, assonance and "sprung rhythm", Hopkins has not only overcome the restrictions of the short poem, but used the form toward the betterment of his verse. Indeed, most of Hopkins's verse was written in the sonnet form or shorter. It is the short poem genre that allows Hopkins to use compressed, vibrant language in a compressed, vibrant form and hence, reflect his vision of the natural world and the creator in a way that best suits the nature of the subject. Another poet able to overcome the limitations of the short poem was William Butler Yeats, in a somewhat dissimilar fashion to Hopkins. While in "Pied Beauty" Hopkins uses a vivacious, energetic style to express his subject, in "All Things Can Tempt Me" (pg.168), Yeats demonstrates his concerns in a different, simpler style to that found in "Pied Beauty". "All Things Can Tempt Me" is but one of Yeats's many poems in which he discusses his own "craft of verse" in relation to his life. In the poem, he expresses his despondency at the world of emotion and action - the world that used to distract him from the composition of poetry. ...read more.