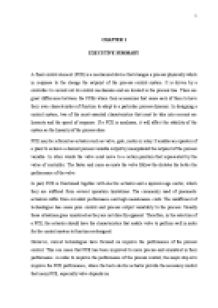 Final Control Element. FCE may be referred as actuator such as valve, gate, motor or relay. It enables an operator of a plant to achieve a desired process variable

﻿CHAPTER 1 EXECUTIVE SUMMARY A final control element (FCE) is a mechanical device that changes a process physically which in response to the change the setpoint of the process control system. It is driven by a controller to carried out its control mechanism and are located in the process line. There are great differences between the FCEs where their accessories that cause each of them to have their own characteristics of function to adapt to a particular process dynamic. In designing a control system, two of the most essential characteristics that must be take into account are linearity and the speed of response. If a FCE is nonlinear, it will affect the stability of the system as the linearity of the process does. FCE may be referred as actuator such as valve, gate, motor or relay. It enables an operator of a plant to achieve a desired process variable output by manipulated the setpoint of the process variable. In other words the valve must move to a certain position that represented by the value of controller. The faster and more accurate the valve follow the dictates the better the performance of the valve. In past, FCE is functioned together with electric actuator and a squirrel-cage motor, which they are suffered from several operation limitations. The commonly used of pneumatic actuators suffer from overshot performance and high maintenance costs. The insufficient of technologies has cause poor control and process output variability to the process. Usually these situations gone unnoticed as they are not directly apparent. Therefore, in the selection of a FCE, the actuator should have the characteristics that enable valve to perform well in order for the control system to function as designed. However, current technologies have focused on improve the performance of the process control. This can mean that FCE has been improved to more precise and consistent in their performance. in order to improve the performance of the process control, the major step is to improve the FCE performance, where the beck electric actuator provide the necessary control that many FCE, especially valve depends on. ...read more.

Gate valve is designed to be used as an isolation valve. When they are under operation, they are usually in a fully closed or fully open position. Therefore, when it is opened, it allows the fluid to flow in a straight line through at the least resistance. Instead, if it is fully closed, it will not allow any fluid to pass through. However, gate valve cannot be being used to adjust or regulate the flow due to its fully closed or fully opened limitation. In addition, if the gate valve is partially opened, this may result in corrosion to the valve discs and seating surface. Besides, the vibration that occurred due to the high fluid flowrate on the discs may cause the discs to be chattered. Therefore, a special design gate valve is used for low velocity throttling. For example, guillotine gate valve is used for pulp stock process. In benzene distillation, there are gate valves with electrical, manual and pneumatic actuator involved, including of other type of valves such as pressure relief valve. For the operating principle of gate valve, gate valve is usually used gas pipelines in control the fluid flow. When the handle wheel is rotated in clockwise direction, the stem and gate will move downward and start to move across the gas flow and hold tightly between two seats. Thus, the gate will help in prevent the flow of gas and seal the pipeline from any gas leakage through the vales as the valve is completely closed. So, when the valve is closed, the gate surface will seal by only depend on the medium pressure to pressure the sealing surface of the gate plate to the other side of the valve seat to ensure sealing surface, known as self-sealing. However, in most cases, the valve will be forced to close by external forces to press the gate to its seat to ensure sealing surface. ...read more.

When the pressure in the equipment reached the maximum availability and the excess pressure is not releasing to surrounding, this will cause process cannot running under optimum condition and hence less efficient of the process will occurred. By releasing the pressure from the equipment, the process in equipment can happen at its optimum pressure condition. Lastly, the role of PRV in maintain the pressure condition of the process at the optimum level also help in minimise the operating cost of the plant as the pressure will be always maintained at the desired level tom optimise the process in the equipment, thus less operating will be required per yield. CHAPTER 4 CONCLUSIONS As we know, FCE play important roles in control the flow of the process plant in petrochemical industr. Final control elements are basically operated after received the signal from controller and regulate the flow of fluid in the plant. Gate valves being one of the major FCE found in benzene distillation plant, allow or prevent the flow of fluid involved to help in optimise the process of separation between benzene and toluene. Since, the separation process is usually carried out under high temperature condition, it is necessary that gate valves is applied as it ability of withstand high temperature besides of its cheap in price and low maintenance costs advantages. Gate valves with different actuator is implemented in the plant with different purposes as electric actuated valve help in control flow of high velocity fluid in the plant in addition of avoid elimination of benzene to environment. Gate valve with manual actuator is used in control the flow column output t heat exchanger and removal of fuel gas from solvent. Meanwhile, pneumatic actuator valve acted as temperature, pressure, flowrate and level control valve by receives signal from each controller. Also, PRV is installed mainly with a purpose of releasing the excess air from the major equipment to maintain the pressure inside. Therefore, final control elements are exist in every oil and gas plant in industry with the role of control and optimise the process condition in the plant. ...read more.