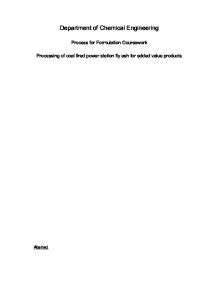 Processing Fly ash. This report will focus on the use of fly ash in products such as bricks, concrete and lumber. It appears that in many cases the fly ash which is produced in coal fired power plants can replace materials of higher value in such products

This report will focus on the use of fly ash in products such as bricks, concrete and lumber. It appears that in many cases the fly ash which is produced in coal fired power plants can replace materials of higher value in such products, whilst maintaining or even improving their properties. This is beneficial because the cost of the product can be reduced. There are also significant environmental advantages associated with the use of fly ash. One tonnes of cement will produce roughly one tonne of carbon dioxide emissions, compared to no emissions with fly ash. In current climates this might prove an important factor. Fly ash concrete is of particular relevance in this sector and will be discussed later.

Fly ash is the residue from the combustion of pulverized coal in power plants. The composition of fly ash depends not only on the mineralogical composition of the coal, but also the combustion method. The residue usually consists of 15% bottom ash and 85% fly ash. Under the high temperatures of the furnace the inorganic compounds melt and form spherical particles encapsulating various minerals. The ash is removed using electrostatic precipitators.

Currently, globally only 1% of fly ash is being utilised in value added products. Skodras, G. (2005) Yet using all the fly ash produced each year in concrete production would have the equivalent CO2 reduction of eliminating 25% of the worlds vehicles. Headwaters Resources Ltd (2010)

Skodras, G. (2005) lists 4 major areas that fly ash is used, making bricks and blocks, manufacture of cement, road construction and backfill for land development. So far the largest use of fly ash is in Portland cement (Kayali, O. 2005)

The disposal of fly ash in slurry ponds or landfill can be detrimental to the environment causing pollution of groundwater. Airborne fly ash is even more detrimental and can cause eyesores and breathing problems.

As early as 1914 fly ash has been put to beneficial use, although before this time the Romans recognized its’ potential, utilising volcanic ash in structures such as the Pantheon and aqueducts. Recently, and largely because of the global sustainability push, fly ash has risen from the ashes, so to speak, and ways to use it effectively are being actively researched. Professor Henry Lui lead the way in using fly ash in green bricks and his company EcologicTech along with others, continue to research better and greener uses for fly ash.

Kayali, O. highlights that in some countries such as India, coal is the main fuel used for electricity generation and bricks are the most common construction material, so manufacturing bricks from fly ash would be highly desirable and profitable. In Australia bricks have been manufactured under the patent name FlashBricks, whose only solid ingredient is ash, with small amounts of water and setting liquid whose formula is currently commercially protected, though it is said to be cheap and commonly available. Small amounts of oxides can be added if a certain colour is desired.

Kayali, O. reports that the FlashBricks are superior from both cost and physical characteristics perspective. In terms of cost fly ash can be sourced for free which displaces the cost of clay. Clay is normally excavated from the top soil which is detrimental to the environment and requires energy input because of the grinding process. Personnel are also used in the assessment of the raw materials used in clay bricks, however fly ash requires no such assessment because its’ content is continually analysed at the power plant as part of a mandatory practice. This is important because clay can vary dramatically depending on its location, and although fly ash does too it is to a much lesser extent, the uniformity means that the manufacturing process (firing time etc.) can be more finely tuned for optimum physical properties. The FlashBricks also require less firing time.

Kayali, O. carried out a series of tests on the FlashBricks, on clay bricks and on the best clay bricks available in the Australian market. Table 1 in the appendix is taken from Kayali, O work and shows the comparison of physical properties of the three bricks.

Initial rate of absorption (IRA) and absorption capacity are two important factors which should be considered in brick making. IRA is important in brick laying because it determines how well the bricks are bonded by mortar to the other bricks. Absorption capacity is also important because if the capacity is too high then the bricks are greatly affected by freeze-thaw cycles, if it is too low rain run-off can affect durability of other building components such as mortar joints and can lead to leaking. The strength of the bricks bonded by mortar was also tested by applying an increasing load via a wrench and finding the upper limit with which the top brick is de-bonded. Kayali, O. found that FlashBricks gave an average (over 6 repetitions) bond strength of 0.41 MPa whereas clay bricks gave 0.18 MPa when the same mortar was used. This was attributed to the superior surface microstructure of the FlashBricks which had small surface indentations and allowed better interlocking between the brick and the mortar. Figure 1 is a close-up view showing the surface texture of the FlashBrick. 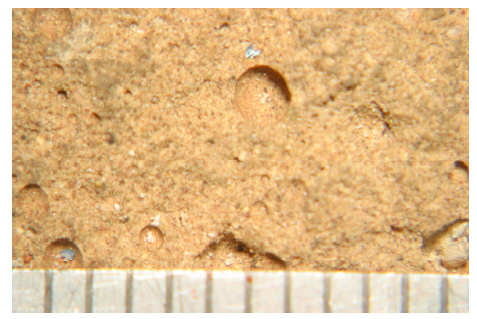 The success of bricks composed largely of fly ash is in the processing method, where the bricks require adequate compression and firing times, and the correct amounts of water and setting agent, during the mixing process. ExpoHydratech PVT Ltd manufacture bricks in the following manner. The mixture is prepared then shovelled on to conveyer belt. The mixture drops into brick moulds where it is pneumatically compressed. The mould is removed and the bricks are sent to the curing area. 8 bricks are made in one cycle, but there is no limit to the number that can be made. This represents a small scale operation, the important factors are the mixture preparation and composition, the pressure under which the bricks are compressed and for how long and the temperatures for the curing of the bricks. Technologically the process is not advanced but tweaking of the process and composition will lead to continual improvement in brick properties.

EcologicTech (2010) are aiming to start manufacture of their fly ash roofing tiles in 2012 which are expected to be cheaper than conventional tiles and offer “superior reflectivity.”

Concrete offers the largest potential for fly ash utilisation, whilst currently making up 60% of all fly ash usage. Conventional concrete mixtures utilise less than 30% by mass of fly ash, which replaces the Portland cement mixtures. T.P.SINGH (2007) admits industry apprehension regarding concrete using higher than 35% fly ash. Engineers are rightly sceptical when contractors reduce costs, assuming the cost cutting will lead to inferior long term concrete performance, but in the case of fly ash this might not be justifiable. Recent research into high volume fly ash concrete (HVFA) have shown that much larger percentages can be used in conjunction with chemical admixtures and offer economic and technical viability. Obla, K. (2009). The fly ash content is believed to provide a much better hydration process for the pozzolanic reactions. Namagga, C. (2009). Obla, K. (2009) used the Arrenhius maturity function to predict different properties of their high performance concrete mixtures and found encouraging results when comparing cementitious mixtures containing up to 50% fly ash by mass. Namagga, C. (2009) suggests that the fineness and lime content properties of fly ash are of great importance since they affect they air content and water demand of the cement, which in turn affects the durability and strength of the concrete. HVFA is believed to be beneficial because it aids in the creation of “nucleation centres for the cement hydration products to precipitate,” Chandra, S. (1997)

Like fly ash bricks the fly ash composition will affect the properties of the concrete. Important composition factors include carbon content and lime content. Generally it is desirable to have as low as possible carbon content in the fly ash. Loss on ignition (LOI) is a measure of this un-burnt carbon makes air entrainment difficult and also leads to discolouration. Schmidt (2000)

One of the main disadvantages of HVFA concrete is the increased setting time. In conventional concrete with high amounts of cement the evolution of heat when the concrete is put in place to set raises the temperature in turn speeding up the dehydration process. In HVFA concrete the reduction of the cement content leads to a slower evolution of heat and retarded setting time. Chandra, S. (1997) The lime content of the fly ash is important in this situation because high lime fly ash generates more heat when in contact with water, which generally has less of a retarded setting effect. This highlights the need to monitor the composition of fly ash as it is produced at the power plant in order to optimise setting times.

Leschinsky, M.Y. (1991) incorporated 40% fly ash into concrete mixtures which were cured at 90 degC for 8 hours and then curing at room temperature for 30 days. Higher strengths than conventional concretes where found. Interestingly after 2.5 years the concrete exhibited 150% strength increase compared to after 30 days, suggesting slow pozzolanic reactions.

Generally fly ash particles are larger than cement particles and have lower absorption capacity so they require less water. In general as the ash fineness increases so does the required water content. Strength is generally the most important factor or concrete quality.

Cannon, R. W (1968) suggests that the most important reasons for using fly ash is because it replaces the sand conventionally used (sand almost always lowers the all the performance aspects of concrete) whilst retaining its workability. (The fly ash’s spherical glassy particles act similarly to ball bearings)

Fly ash has been used in the creation of wood substitutes, such as in LifeTime Lumber composites. The product is marketed as a lumber product but is actually a “reinforced thermoset polymer with coal ash filler.” Its composition is 50-85% fly ash, 12-30% polyurethane resin less than 0.5% surfactant, 2-6% iron oxide pigments and 2-7% reinforcement materials. The product is interesting because of its likeness to real lumber, lower costs and environmental impact and longevity (it does not need to be painted with preservant) however it is yet to be fully accepted by the American market.

Fly ash has a huge potential to reduce costs and offset energy uses and carbon dioxide emissions worldwide. In many sectors only public perception and lack of adequate knowledge about the products are holding back their infiltration into the market. In some cases technical challenges have arisen and more research is needed to optimise formulation mixtures whilst maximising the percentage of fly ash used. Often the addition of small amounts of particular chemicals (such as setting additives and oxides) can make significant differences to the material properties of the products. New processing methods are being developed all the time. In India companies such as ExpoHydratech PVT Ltd have produced brick manufacturing machines which are portable and easy to run requiring less personnel than conventional brick manufacturers.  New products seem to be entering the market, such as EcologicTech’s roofing tiles and also lumber substitutes. The abundance of fly ash will mean companies will be excited to work with it, especially as landfill prices increase. With plans to introduce carbon capture and storage to coal fired power plants there is sure to be an increasing use of coal worldwide and therefore more fly ash so fly ash utilisation will become increasingly important. 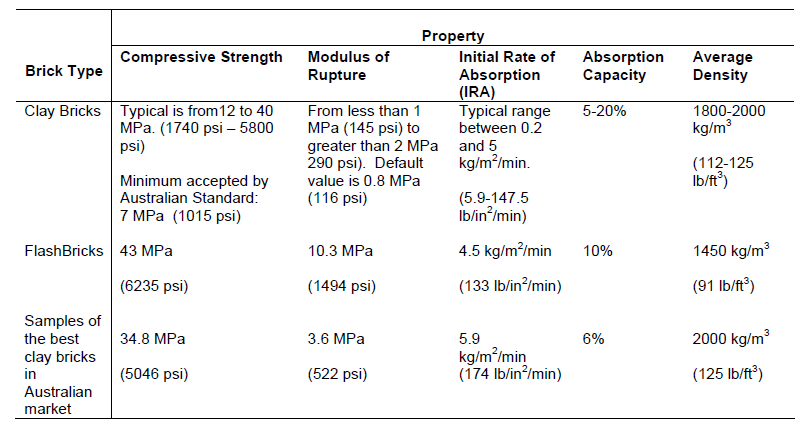 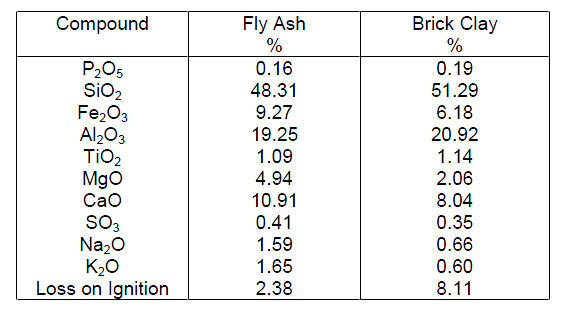