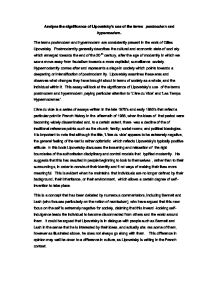 Analyse the significance of Lipovetskys use of the terms postmodern and hypermodern.

Analyse the significance of Lipovetsky's use of the terms postmodern and hypermodern. The terms postmodern and hypermodern are consistently present in the work of Gilles Lipovetsky. Postmodernity generally describes the cultural and economic state of society which emerged towards the end of the 20th century, after the age of modernity in which we saw a move away from feudalism towards a more capitalist, surveillance society. Hypermodernity comes after and represents a stage in society which points towards a deepening or intensification of postmodernity. Lipovetsky examines these eras and observes what changes they have brought about in terms of society as a whole, and the individual within it. This essay will look at the significance of Lipovetsky's use of the terms postmodern and hypermodern, paying particular attention to 'L'�re du Vide' and 'Les Temps Hypermodernes'. L'�re du vide is a series of essays written in the late 1970's and early 1980's that reflect a particular point in French history in the aftermath of 1968, when the ideas of that period were becoming widely disseminated and, to a certain extent, there was a decline of the of traditional reference points such as the church; family; social norms; and political ideologies. It is important to note that although the title, 'L'�re du vide' appears to be extremely negative, the general feeling of the text is rather optimistic which reflects Lipovetsky's typically positive attitude. In this book Lipovetsky discusses the loosening and relaxation of the rigid boundaries of the authoritarian disciplinary and control models that typified modernity. ...read more.

This is a perfect encapsulation of the postmodern personalised way of being. This increased model of informality also manifests in the political sphere. Lipovetsky argues that there is a clear decentralisation and dissemination of power as "le separation dirigeant-�xecutant"7 is broken down. In this postmodern age politicians feel the need to be ostentatious about their simplicity and show themselves as real, ordinary people with human weaknesses rather than all powerful leaders: "l'homme politique apparait en jean ou en pull-over, reconnait humblement ses limites et faiblesses, met en scene sa famille, ses bulletins de sant�, sa jeunesse"8. This personalised version of politics corresponds to the new values of this era such as authenticity, friendliness, and transparency, and allows the individual to better identify with and relate to politicians, which subsequently leads to him giving them his support. Later on in the book, Lipovetsky considers how humour has also developed as society has moved into postmodernity. He draws explicitly on Foucault in suggesting that the ambient humour which is present in the postmodern context is post-disciplinary: "il faut comprendre le d�veloppement de ces formes modernes du rire que sont l'humour contr�le t�nu et infinit�simal exerc� sur les manifestations du corps, analogue en cela au dressage disciplinaire qu'a analys� Foucault"9. He puts forwards a rather nice periodization of different forms of humour by suggesting that the carnival-esque humour of the renaissance period progressed into a more cerebral based humour (for example, wit and satire) ...read more.

present and future dangers: "Le climat du premier pr�sentisme lib�rationniste et optimiste, empreint de l�g�ret�, s'est efface, au b�n�fice d'une demande generalise de protection"20. This can be attributed to the fact that people, particularly in the work place, are no longer able to draw upon collective support networks of old that might help them deal with the pressures around them. It could therefore be argued that this intensification of individualisation associated with hypermodernity has removed the outside parameters, or external reference points, by which individuals can define him themselves. Despite this intensified individualism that is present in the hypermodern society, Lipovetsky maintains a positive outlook by claiming that there are still collective identifications that individuals can make. He suggests that, although individuals no longer subscribe to large moral frameworks, they are still motivated by ethical and humanitarian issues. This demonstrates that people still have the capacity to come together, but as individuals rather than a collective. In conclusion, it is evident that Lipovetsky's puts forward a thorough analysis of both the postmodern and hypermodern era's, demonstrating clearly how society has moved away from the control of the disciplinary era, towards a more fluid and individualised culture, maintaining a optimistic outlook on the way in which the world is developing. His use of the terms postmodern and hypermodern can be argued to significant in the sense that they offer a valuable framework of reference in examining the different ways in which the human condition and the dynamics of society have changed throughout these periods. ...read more.