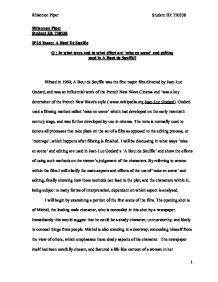 In what ways and to what effect are mise en scene(TM) and editing used in A Bout de Souffle?

Rhiannon Piper Student ID: 720338 IFLS Essay: A Bout De Souffle Q : In what ways and to what effect are 'mise en scene' and editing used in A Bout de Souffle? Filmed in 1960, A Bout de Souffle was the first major film directed by Jean-Luc Godard, and was an influential work of the French New Wave Cinema and 'was a key determiner of the French New Wave's style ( www.wikipedia.org Jean-Luc Godard). Godard used a filming method called 'mise en scene' which had developed on the early twentieth century stage, and was further developed by use in cinema. The term is normally used to denote all processes that take place on the set of a film as opposed to the editing process, or 'montage', which happens after filming is finished. I will be discussing in what ways 'mise en scene' and editing are used in Jean-Luc Godard's 'A Bout de Souffle' and show the effects of using such methods on the viewer's judgement of the characters. By referring to scenes within the film I will clarify the main aspects and effects of the use of 'mise en scene' and editing, finally showing how these methods can lead to the plot, and the characters within it, being subject to many forms of interpretation, dependant on which aspect is analysed. ...read more.

At one point in the scene Michel opens the glove compartment of the car and takes out a gun, which he proceeds to point at various cars in passing, takes aim, and then makes a noise as though he has fired upon them. This insinuates that Michel has a penchant for playing games, which adds to the impression given by the nature of the newspaper in the first scene. It also hints at the fact that there may be a theme in the film of playing games, and perhaps even dangerous games. This is later revealed in the relationship between Michel and Patricia, in which there is a great deal of light hearted game playing, but there is also a very serious under current, for example when Michel says that he will strangle Patricia if she does not do something he asks her to do. When Michel gets caught up in a small traffic jam he starts bemoaning female drivers and uses a quote he knows by a man named Bugatti - "les voitures sont pour faite rouler, pas pour s'arreter". Though this could be taken to be a normal aggravation for a seemingly selfish and uncouth character, it also intimates there may be an event in the film where he runs rather than stopping. ...read more.

By using 'mise en scene' to such an extent Godard influences every decision which takes place in an audience member's mind. Such a thorough and consistent use of this method of filming shows a highly capable and intelligent mind, which quite possibly enjoys the use of that intelligence to cheat his audience of the right to make their own decisions. Godard's use of editing is what really keeps the audience on their toes. He manages to influence the viewer by confusing them, first of all as seen in the section of Michel's drive to Paris where the editing contrasted with the real time of the strange singing, and then also when Michel shoots the policeman. At that point editing was used to speed up the section, contrasting which the focus of attention on the gun and Michel's calculating mind which seemed to slow down the scene. Such an effect is cleverly thought out, and again, shows a mind which delights in making the viewers work through the film rather than simply watching it. I find therefore that Godard planned out every section of this film, into minute detail and knew exactly how and to what effect he would use 'mise en scene' and editing. ...read more.