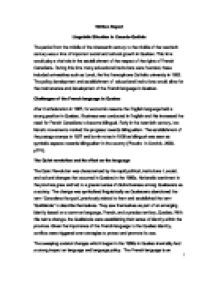 Linguistic Situation in Canada-Qubc. The changing linguistic landscape of Quebec

The period from the middle of the nineteenth century to the middle of the twentieth century was a time of important social and cultural growth in Quebec. This time would play a vital role in the establishment of the respect of the rights of French Canadians. During this time many educational institutions were founded, these included universities such as Laval, the first francophone Catholic university in 1852. The policy development and establishment of educational institutions would allow for the maintenance and development of the French language in Quebec.

Challenges of the French language in Quebec

After Confederation in 1867, for economic reasons the English language held a strong position in Quebec. Business was conducted in English and this increased the need for French Canadians to become bilingual. Early in the twentieth century, two historic movements marked the progress towards bilingualism. The establishment of the postage stamps in 1927 and bank notes in 1936 as bilingual was seen as symbolic aspects towards bilingualism in the country (Ploudre in Conrick, 2000, p174).

The Quiet revolution and its effect on the language

The Quiet Revolution was characterized by the rapid political, institutional, social, and cultural changes that occurred in Quebec in the 1960s. Nationalist sentiment in the province grew and led to a greater sense of distinctiveness among Quebecers as a society. The change was symbolised linguistically as Quebecers abandoned the term ‘Canadiens français’, previously related to them and established the term ‘Québécois’ to describe themselves. They saw themselves as part of an emerging identity based on a common language, French, and a precise territory, Quebec. With this name change, the Québécois were establishing their sense of identity within the province. Given the importance of the French language to the Quebec identity, conflicts were triggered over strategies to protect and promote its use.

The sweeping societal changes which began in the 1960s in Quebec inevitably had a strong impact on language and language policy. The French language is an integral part of the Québécois identity, it is a central component, as it defines their distinctiveness. It was and still is a central element of the Québécois national character. The status of the language was shown through the establishment of the Office de la Langue Française in 1961, which allowed for a more focused structure to develop policy in relation to language issues in Quebec. ‘This institution played and continues to play, a leading role in the promotion and development of French in the province.’ (Conrick, 2007, p. 31)

Language issues featured increasingly as a problem for Quebecers as they became more demanding in respect of their language rights. They worried about losing their language and how this inevitably could lead to a loss of identity. Therefore, they pursued a Quebec nationalist agenda. In response to these issues, the Royal Commission on Bilingualism and Biculturalism was set up in 1963. The function of this commission was to investigate and report on the existing state of bilingualism and biculturalism in Canada. It’s primary functions was to recommend what steps should be taken in order to develop the Canadian Confederation on the basis of an equal partnership between the two founding races. (Royal Commission on Bilingualism and Biculturalism, 1967: Appedix 1). It represented significant progress in terms of promoting linguistic duality in Canada, as it enabled a new era of language policy.  This commission gave rise to the enactment of the first Official Language act in 1969 which attempted to ensure that both English and French have equal status and rights in federal institutions. This is continually reiterated by the Federal Government during the speech at the opening of a new session of parliament. Statements such as ‘Linguistic duality is at the heart of our identity.’ atest to this. (Commissioner of Official Languages, Speeches from the Throne, Febuary 2004)

The changing linguistic landscape of Quebec

The linguistic landscape in Canada has changed immensely since the introduction of French in the sixteenth and seventeenth centuries. The census of the population  is a major source of data on the demographic linguistic situation and on developing trends in Canada. The most recent census of the Canadian population was carried out in 2001, language data was collected on the following:

The most interesting outcomes from this census data in relation to the linguistic composition of Quebec is that it continues to be the only province in Canada in which francophones are the majority (81.4%). French in Quebec continues to be, by a long way, the majority language, with a strong positions in the private (home) and public (work) domains. Trends such as the increase in language transfers of allophones to French rather than English at home, and the high percentages among all groups for use of French at work, are strong positive indicators of the status of French as a viable language not only in the home, but in the workplace in Quebec. From this data it is clear that Quebec is linguistically, as well as historically and culturally, is a province apart from the rest in Canada.

Underlying much of the variations in Canadian French is the origin of the speakers who came from two different colonies, one established by Champlain in 1604 at Port-Royal, which was called Acadie, and the second four years later at Quebec. These two colonies gave rise to the two principal dialects of French in Canada, Acadian French and Quebec French.

The major characteristics of the French language used in Quebec usually refers to archaisms, neologims and borrowings as typical features. To describe Canadian French, it is essential to examine and understand variation in the language. Variations in any language exist, they reflect both geographical as well as social influences. Some of the factors that influence variability include the region the speaker comes from, the age of the speaker, gender and socio-economic standing.

Archaisms are a language feature which had decended from seventeenth century French. The many archaic features of Quebec French include retention of the seventeenth century [we] pronunciation in words such as moi, toi, poil, "me", "you", "hair" (Modern French [mwa, twa, pwal]). Expressions such as mitan, “middle” (Modern French: milieu), serrer, "to put in a safe place" (Modern French: ranger), à cause que, “because” (parce que). The preposition “à” to locate events in time, à soir, à matin, à tous les jours, "tonight," "this morning," "every day” (ce soir, ce matin, tous les jours).

In the interest of adapting and surviving in the new environment, the early settlers created new words, neologisms, to fit their new realities. Many of the terms in Quebec French which are different from those of France relate particularly to a Canadian environment. Terms relating to winter, the maple syrup industry, geographical terrain, Canadian seasons, and dramatically changing temperature were developed to fit the new extra-linguistic realities the speakers were faced with. Words were created to refer to new plants, animals, agriculture and economic activities. An example of Quebec French neologisms include poudrerie, “powder” [from poudre] to refer to drifting blowing snow.

Every language changes over time, change can be due to multiple factors. In the case of Canada, there is also change due to its contact with English. Some borrowed, adapted and created words have become part of what can be classed as standard Quebec French. An example of this is ‘anglicisms’. Whether taking the form of direct word borrowings from English, eg, le boss (patron) and job (travaille) or translating word for word an English expression, eg, prendre une marche (aller se promener) [from English "take a walk"]. These expressions made their way into Canadian French notably during the 19th century and the first half of the 20th century. During that period French was dominated by English in many sectors of Canadian society. For example, the technical vocabulary of Francophone forest workers would include many English words, eg, de la "cull" (du bois de rebut), un "boom" (une estacade), un "skid" (un longeron ), un "cant-hook" (un levier) (Thibault, 1980, p.98)

Over the last 200 years, French Canadians who believe it is important to preserve the purity of Canadian French and to instill a sense of pride within the French Canadian nation have advocated the eradication of anglicisms. Up until the late 1960s their efforts have not been very successful; however, recent legislation designed to make French the language of work in Québec has increased general awareness of French vocabulary on the part of workers and has brought a decline in the use of anglicisms.

Spoken Canadian French displays a considerable range of style and social variation. For instance, the informal speech of ordinary Canadians will differ markedly from the spoken French of announcers on the FrenchRadio and Television network. Informal speech tends to include many of the distinctive features of Canadian French mentioned above, while the more formal speech used in media includes fewer such features and tends to align itself with European Standard French.

Usually what the hearer perceives as the most notable difference between Canadian French and European French is the pronunciation. This is evident in the development of a full-fledged system of diphthongized lengthened vowels which do not exist in European French. These include words like pâte ("paste" or "dough") or beurre ("butter") which can be pronounced as [paw:t] and [boew:R],

The increased standing of Canadian French and the admiration in which it is held, is testament to it’s equal status to French in the Hexagon. In this new linguisic confidence, Canadian speakers have been significantly helped by ‘provincial legistlation which underpinned the status of French in Quebec and Federal legislation which established the position of French in Canada (the Official Language Act 1969, where English and French were accorded equal status and in Quebec). (Conrick, 2007, p131). Canadian French is very much a distinctive variety of French and very much part of the Canadian identity.