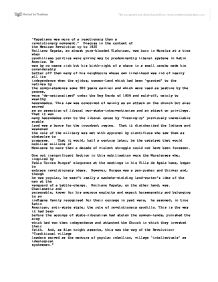 &amp;#145;Zapatismo was more of a reactionary than a revolutionary movement.&amp;#146; Discuss in the context of the Mexican Revolution up to 1920

'Zapatismo was more of a reactionary than a revolutionary movement.' Discuss in the context of the Mexican Revolution up to 1920 Emiliano Zapata, an almost pure-blooded Tlahuican, was born in Morelos at a time when caudillismo politics were giving way to predominantly liberal systems in Latin America. He was by no means rich but his birth-right of a share in a small rancho made him considerably better off than many of his neighbours whose own livelihood was rid of nearly all its independence when the ejidos, common-land which had been 'granted' to the natives by the conquistadores some 300 years earlier and which were used as pasture by the peones, were 'de-nationalised' under the Ley Lerdo of 1856 and sold-off, mainly to wealthy hacendados. This law was conceived of mainly as an attack on the church but also served as an assertion of liberal non-state-interventionism and an attack on privilege. That it won many hacendados over to the liberal cause by 'freeing-up' previously unavailable arable land was a bonus for the incumbent regime. That it disinherited the Indians and weakened the role of the military was met with approval by cientificos who saw them as obstacles to progress. ...read more.

But what was the role of the Zapatistas in this? It is adventurous even to claim that the destitute, illiterate peon, was ever, subjectively, involved in a revolutionary process. As Knight puts it "the Mexican Revolution... was the work of diverse, localised, backward-looking rebels, who were themselves not revolutionary." For him, the rebel, the situation was simple; the local hacendado had stolen his land and he wanted it back. If he held a macrocosmic vision at all, it was that the Indians and mestizos in the neighbouring pueblo were suffering the same injustice at the hand of a similar tyrant to his own; usually pitiless, usually a Creole. He knew that any hope of reclaiming the ejidos was obstructed by the ruthless Guardia Rurale, the Federals, the hacendado's own, equally merciless, private army or the combined forces of all three. In the meantime, however, he had to work to try to scrape together what living he could; he and his family had to eat and attempt to clothe themselves, living quarters had to be provided and there were, for the lucky ones, farm animals to rear. Life was a desperate struggle. This was the reality of Porfirian Mexico for the debt-peones and peasants and it was a reality they would take with them into ...read more.

If only. So, if Zapatismo was the embodiment of Emiliano Zapata then, yes, it was a reactionary movement. If its contribution to the Mexican Revolution of Madero, Villa and Carranza (and, it must be conceeded that that was the revolution that 'happened to happen,') then, yes, it was a reactionary's contribution. If the Plan de Ayala, with its immovable utopian goal-posts in an ever-expanding, ever-liberalising, ever-capitalising international field of play, was its primary offering to a national project, then yes, Zapatismo was indeed reactionary. But even though these conditions are fulfilled, Knight's argument that "it would be wrong to deny 'reactive' peasant movements revolutionary status," is valid. Zapatismo's contribution to the Revolution was invaluable. As for the activists behind the man, myth and movement, their status should not be belittled. As Knight says of them: "The Zapatistas were revolutionaries, even if they were not winners in the 'success story' of history." "... peasant protest was generally backward-looking, and 'traditional' (though not 'apolitical,' and still less 'spontaneous,' as often alleged. The ideology of protest, furthermore, was often vague, ostensibly inconsistent and inarticulate." (Kn 161) "Zapatismo, though later tinged by anarcho-sindicalism, drew principally upon traditional liberal and patriotic ideas, and had no difficulty in reconciling these with rural Catholicism." (Kn 163) "Revolution... generally implies a violent political conflict in which, at the very least, more than a government re-shuffle is at stake. ...read more.