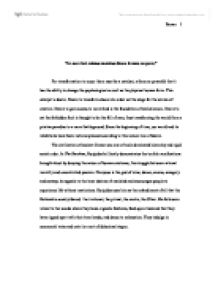 "In nova fert animus mutatus dicere formas corpora;" For transformation to occur there must be a catalyst, a force so powerful that it has the ability to change the psychological as well as the physical human form. This catalyst is desire. Desire to transform chaos into order set the stage for the stories of creation. Desire to gain access to more food is the foundation of evolutionism. Desire to eat the forbidden fruit is thought to be the fall of man, thus transforming the world from a pristine paradise to a moral battleground. Since the beginning of time, our world and its inhabitants have been metamorphosed according to this natural law of desire. The civilization of ancient Greece was one of male dominated hierarchy and rigid social order. In The Bacchae, Euripides brilliantly demonstrates the terrible ramifications brought about by denying the nature of human existence, the struggle between rational morality and uncontrolled passion. Dionysus is the god of wine, dance, excess, savagery and ecstasy, he appeals to the inner desires of mankind and encourages people to experience life without restrictions. Euripides uses him as the embodiment of all that the Hellenistic society feared: the irrational, the primal, the exotic, the Other. His followers retreat to the woods where they have orgiastic festivals, feed upon livestock that they have ripped apart with their bare hands, and dance to exhaustion. They indulge in ceremonial wine and exist in a sort of delusional stupor. Dionysus easily engages the female population of Thebes because he provides a release from their otherwise rigid and oppressed existence. He takes them from Thebes, removes them from their domestic chores and transforms them into self-reliant individuals with supernatural powers. ...read more.

"His head and his heart was drunk, and his steps followed the dictates of that dark god whose pleasure it is to trample man's reason and dignity underfoot" (Mann 244). It is interesting to note that the origin of the cholera, which ultimately kills Aschenbach, is India, the land from where Diosysus hails. In Aschenbach's dream he envisions the " 'the stranger-god,' the enemy of the composed and dignified intellect" (Mann 256). This dream links Archenbach's dissention into desire with the worship of Dionysus. He awoke from the dream only to find himself powerlessly enslaved to the demon god, wishing that all the unwanted people in the city would either flee or die, leaving him alone on the island with the object of his desire. One afternoon, while following Tadzio and his family through the city streets,. Aschenbach finds himself lost in the labyrinth of the sick city. This is obviously symbolic of the state of his soul. The garbage that lay about the ground and the weeds that grow through the cobblestone represents the decay of the aged writers sensibility and morality. Once a an avid follower of Apollonian ideals, the notion that order and control must prevail over man's desires, Aschenbach has now resigned himself to the primal nature of his Dionysian conscious. In a dream-like state he once again has a vision of Socrates speaking to the young Phaedrus about the artist's path to the spirit and the dangers that the sensual side of art poses, its ability to transform the moral core of the artist: ...our pursuit is of Beauty alone, of Beauty which is simplicity, which is grandeur and a new kind of rigor and a second naivete, of Beauty which is Form. ...read more.

(Ovid 61). Upon realizing that the innocently lost hunter had viewed her naked body, Diana is furious. She looks around for a weapon but resorts to throwing water at Actaeon. "Those drops had vengeance in them...but on the sprinkled forehead/ Horns of the long-lived stag began to sprout" (Ovid 62-63). He flees the presence of Diana and runs to a quite pool where he finally sees his reflection. "Alas!/ He tries to say, but has no words. He groans,/ the only speech he has, and tears run down/ cheeks that are not his own" (Ovid63). While Actaeon tries to decide where to go he is discovered by his own pack of hounds, "With the lust of blood upon them," and so, the hunter has been transformed into the hunted. His hunting companions join the pack to revel in the kill, the whole while calling Actaeon's name, concerned that "he is missing a good show." However, he remained voiceless and his friends did not recognize his pleading eyes. "And so he died, and so Diana's anger/ Was satisfied at last" (Ovid 64). Diana's desire for chaste virginity caused Actaeon's transformation, but his death was the result of animal nature. And gossip argued/ All up and down the land, and every which way:/ Some thought the goddess was too merciless/ And others praised her; maidenhood, they claimed,/ Deserved such stern acts of reckoning,/ And both sides found good for their judgment. (Ovid 64). The powerful emotion of desire, especially when possessed by the powerful, has the ability to transform man into gods, beasts and plants. It can tear apart the foundation of ancient societies, and hurl a stable man's soul into an immoral abyss. Ultimately, there must be an appropriate balance between the apollonian and Dionysian conscious in order to avoid certain personal and universal tragedies. 1 Brown ...read more.