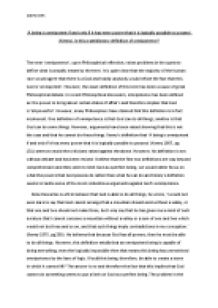 A being is omnipotent if and only if it has every power that it is logically possible to possess (Kenny). Is this a satisfactory definition of omnipotence?

However, God?s power has to be more divine than this. For if it is not then we are simply stating that God can do all that he is able to do, just like humans. But then we are limiting God?s power to the power in which he hold, which seems demeaning. Therefore Aquinas argues that God is omnipotent due to the fact that he can do all things that are ?possible absolutely?. (Aquinas 2007, pg 144). Up until now, it seems that God?s omnipotence implies that God can do anything. However, St.Thomas claims that anything should refer to ?only objects, actions or states of affairs whose descriptions are not contradictory? (Pojman & Rea 2007, pg 268). My failure to draw a square in an may indicate my lack of geometrical skill however my failure to draw a square circle does not indicate this lack, because the concept of a square circle is contradictory and St.Thomas, as mentioned above, has argued that we should not determine God?s omnipotence based on contradictory states of affairs, objects and actions. The question ?Can God create a stone too heavy for him to lift?? poses a problem which many Philosophers have tried to overcome as this goes beyond simply stating that God cannot draw a square circle, which does no damage to the concept of His omnipotence as it is a contradictory claim. ...read more.

Kenny argues for this definition of omnipotence: ?a being is omnipotent if it has every power which it is logically possible to possess?. (Kenny 1987, pg 131). However this still does not overcome some issues as it is logically possible for us to change something or create something that God did not make therefore Kenny has revised this and has arrived at this definition of omnipotence: God?s omnipotence consists in his possessing all powers that it is logically possible for a being with his attributes as God to possess. This account seems to avoid the problems raised for God not being able to, for example, create a stone in which he cannot lift. For this power to create a stone in which he cannot lift does not seem plausible as it is not a logically possible power for God to possess because within the description of this power poses a hidden contradiction. Therefore, it is clear that there has been much debate about the definition of the term ?omnipotence? up until Kenny?s definition was formulated the paradox of the stone created huge difficulties in arguing for what God can do. Kenny?s revised definition seems to tackle this problem by focusing on not on what God is capable of doing but rather the powers that he possesses and therefore seems a plausible in accounting for the definition of omnipotence. ...read more.