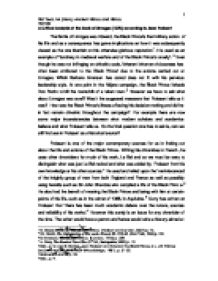 A Critical Analysis of the Sack of Limoges (1370) according to Jean Froissart The Battle of Limoges was Edward, the Black Prince's final military action of his life and as a consequence has grave implications on how it was subsequently viewed as the one blemish on his otherwise glorious reputation1. It is used as an example of 'butchery in medieval warfare and of the Black Prince's cruelty'.2 Even though he was not infringing on chivalric code, 'inherent inhuman viciousness has often been attributed to the Black Prince' due to the actions carried out at Limoges. Which Barbara Emerson has stated does not fit with his pervious leadership style. At one point in the N�jera campaign, the Black Prince forbade Don Pedro to kill the townsfolk of a taken town.3 However we have to ask what about Limoges was cruel? Was it the supposed massacre that Froissart tells us it was? How was the Black Prince's illness affecting his decision making and did he in fact remain chivalric throughout the campaign? For example there are now some major inconsistencies between what modern scholars and academics believe and what Froissart tells us. So the final question one has to ask is, can we still find use in Froissart as a historical source? Froissart is one of the major contemporary sources for us in finding out about the life and actions of the Black Prince. Writing his chronicles in French, he uses other chroniclers for much of his work, Le Bel and so we must be wary to distinguish what ...read more.

Even so the actions did lead to him being accused of lacking the chivalric virtue of pity.20 This was in despite of the fact that 'according to the laws of war, a city that refused to submit to a prince insulted his majesty and should be punished accordingly.'21 Therefore with all of this information available to us, we should find it no surprise that the Black Prince behaved the way he did. It was not the first time that such an incident had occurred but was perhaps merely the most known simply because it seemed to go against the Black Prince's reputation for being chivalrous. One key theme within the period and therefore can easily be found as a theme within the chronicles is chivalry. We find this in several points within Froissart's account. Closely connected to the idea of chivalry is the sense of morality that can be found. The morality is primarily Froissart's own. After all he is writing it. The first sense you get of this is when Froissart mentions that 'the Bishop and the chief citizens knew that they had acted very wrongly...and they regretted it bitterly.'22 This adds to the drama of the larger picture that Froissart paints. It is apart of the lesson in morality that Froissart gives in how it would be these people who would be punished and 'killed' whilst the Bishop, who was the Black Prince's son's godfather and a close adviser of the Black Prince, and the men who were in charge, Sir Hugues de la Roche, Sir Jean de Villemur and Roger de Beaufort end up unpunished. ...read more.

Froissart can provide a valuable insight into this. With his different patrons from both sides of the channel and his subsequent differing manuscripts, it can be inferred what French and what English points of view might have been. We can use Froissart in conjugation with his contemporaries or near-contemporaries to infer this fully and hence can see why the Sack of Limoges was viewed in such a negative light. Chivalry was everything and the Black Prince has been said to be the epitome of the chivalric age. Hence it can be shocking that he could do an action such as the murder of the 'innocent' in the city, regardless of the facts surrounding it which would mean that the Black Prince had every right to go in and subject the rebels to his mercy. They were after all rebels against his rule following their switching of alliance. However for all the value of Froissart, we must remember the bias he would have had in favour of recalling the events in his chronicles to suit his patron. We must remember it is possible he fabricated the truth with the details involved such as the number of dead and the length of time the siege took. Therefore the document can only tell us a limited scope of the history of the time without us looking at contemporaries. All in all though, the Sack of Limoges according to Jean Froissart is a very important historical document. Words: 2,761. ...read more.