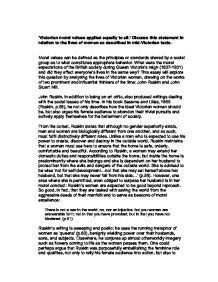 Victorian moral values applied equally to all. Discuss this statement in relation to the lives of women as described in mid-Victorian texts.

'Victorian moral values applied equally to all.' Discuss this statement in relation to the lives of women as described in mid-Victorian texts. Moral values can be defined as the principles or standards shared by a social group as to what constitutes appropriate behavior. What were the moral expectations of the British society during Queen Victoria's reign (1837-1901) and did they affect everyone's lives in the same way? This essay will explore this question by analyzing the lives of Victorian women, drawing on the works of two prominent and influential thinkers of the time: John Ruskin and John Stuart Mill. John Ruskin, in addition to being an art critic, also produced writings dealing with the social issues of his time. In his book Sesame and Lilies, 1865 (Ruskin, p.58), he not only describes how the ideal Victorian woman should be, but also urges his female audience to abandon their trivial pursuits and actively apply themselves for the betterment of society. ...read more.

One could perhaps argue that Ruskin was purposefully embellishing the feminine role and qualities, not only to rally his female audience into action, but also to create a more balanced gender imagery. He might have felt that the woman's passive attributes did not measure up well against the image of the man who actively engages with the outside world. However, once the flowery language is stripped away, we are left with a decidedly less inspiring portrait: a virtuous, obedient wife whose is required to mind her home and husband and undertake charitable activities in her free time. If Ruskin's is an idealized account of womanhood, then we must turn our attention to the writings of John Stuart Mill to get a dose of reality. In Chapter II of his controversial essay The Subjection of Women, 1869 (Mill, p.66), he highlights the extremely circumspect legal standing of married women and in hopes of restoring some justice to the situation, advocates granting women the right to choose whom they marry. ...read more.

In short, legislation saw to it that a woman was utterly subservient to her husband and she had to count on his compassion and goodwill to receive a decent and fair treatment. Taken together, the accounts of Ruskin and Mill provide a vivid picture of what it must have been like to be a woman in the Victorian era. Despite Ruskin's plea to women to do more within their capacity, the foregoing evidence makes clear that this capacity was entirely different than a man's and confined by rigid boundaries brought about both by social norms and the rule of law. Although some women from privileged backgrounds might have had more legal freedom, society would have still seen to it that they conformed to the 'ideal' values of domesticity, obedience and dependence. In conclusion, because Victorian society believed that men and women were inherently different in character, they subjected women to different moral standards than men and this attitude was also reflected in the laws governing women's rights. At least with respect to gender realities in Victorian England, it would be a great oversimplification to claim that moral values applied equally to all. ...read more.