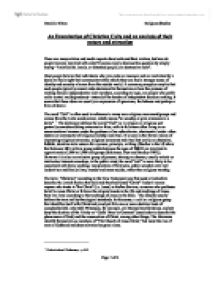 An Examination of Christian Cults and an analysis of their nature and attraction There are many articles and media reports about cults and their victims, but how do people become involved with cults? It seems easy to dismiss this question by simply saying--"only foolish, lonely, or disturbed people join destructive cults". Most people believe that individuals who join cults are insecure and are motivated by a desire to find a tight-knit community within which they can find a stronger sense of identity and security-a haven from the outside world. A common perception may be that such people typically cannot make decisions for themselves or bear the pressure of making choices independently. Cult members, according to logic, are people who prefer cultic control and dependency--instead of the burden of independent decision-making. It seems that these ideas are usually an expression of ignorance, foolishness and perhaps a form of denial. The word "Cult" is often used in reference to many new religious movement/groups and comes from the Latin words colere, which means "to worship or give reverence to a deity." 1 The dictionary defines the world "Cult" as: A religion or religious sect generally considered being extremist or false, with its followers often living in an unconventional manner under the guidance of an authoritarian, charismatic leader: often system or community of religious worship and ritual. It is seen as the formal means of expressing religious reverence; religious ceremony and ritual but can be an obsessive, faddish, devotion to/or esteem for a person, principle, or thing. (Studies in the US show that between 2&5 million young adults between the ages of 18&25 are involved in approximately 2,000 to 5,000 cult groups (Robinson, Frye and Bradley 1997)). ...read more.

So, God instituted a system of redemption that was revealed in the Bible and would ultimately lead to the crucifixion of Jesus. 10 This suggests a malicious group that have taken it upon itself to interpret the bible and cause a climate of fear amongst its members Too often, the established religions require their members to have belief in convincing statements, which are too often unconvincing. Potential group/cult members are frequently too intelligent to accept these statements such as those in the bible without questioning them. Established religions tell their members what they should do but they do not explain how. The question of why, is answered by a statement that requires belief in the first place eg; God said ... In the bible it says... In a New Religious Group (NRG/cults), there exists a greater possibility of personal guidance then is available with mainstream religions. Intelligent questioning is encouraged. NRGs can be a way of questioning and exploration; a journey inward to the essence of oneself to find a place of understanding and to encounter the source of love. The concept of God can be questioned and many levels of meaning explored. Some established religions on the other hand, impose behaviour and expect belief without understanding; they place boundaries on a person's thinking, demand the observance of ritual, and gain obedience by generating fear. Potential followers are invited to a life of constriction and limitation rather than exploration and discovery. Young people are often targets for cults. During adolescence many young people experience a feeling of separation from society and their family and friends. ...read more.

This in my opinion is the real problem with the Jehovah's Witnesses and the Mormons. Also I found the practice of polygamy/ Polygyny to be a double sided argument simply because I think it's interesting that Mormons originally accepted the idea and practice of polygamy but now the "official" Mormon organisation has since claimed that a new revelation has come to light that restricts the practice and teaching of polygamy which means polygamy was and is sacrificed. I find the fact that Mormons seem to simply pick and choose which bits of the bible to believe in troubling and this makes me question the teachings of the Mormon organisation, and of any organisation/cult that claims to be a church but doesn't follow the word of God when it becomes too difficult for them. 1 Oxford school Dictionary - p116 2 The new Believers - sects, cults and alternative religions - David V. Barrett - P161 3 Cults (Faith, healing and Coercion) - Marc Galanter - P6-7 4 The Holy Bible: Jehovah Edition 5 www.watchtower.org/statistics/ 6 www.nationmaster.com/country/mx/Religion 7 www.watchtower.org/statistics/worldwide_report.htm 8 www.watchtower.org/statistics/ 9 Jehovah's Witnesses, The Organization Behind the Name (1990), video tape depicting life inside of Bethel 10 Understanding New Religious movements - 2nd edition - John A. Saliba - P214 - 216 11 Cult," Microsoft(r) Encarta(r) (pc Dictionary) 12 http://movie-reviews.colossus.net/movies/m/manchurian_candidate.html 13 19th march 05 - Telegraph magazine - Under siege in Eldorado - P25-33 14 Under the banner of Heaven - John Krakaure- P18 15 Under the banner of Heaven - John Krakaure - P20 - 24 16 Under the banner of Heaven - John Krakaure - P43- 54 ?? ?? ?? ?? Danielle Hilton Religious Studies Page 1 of 6 ...read more.